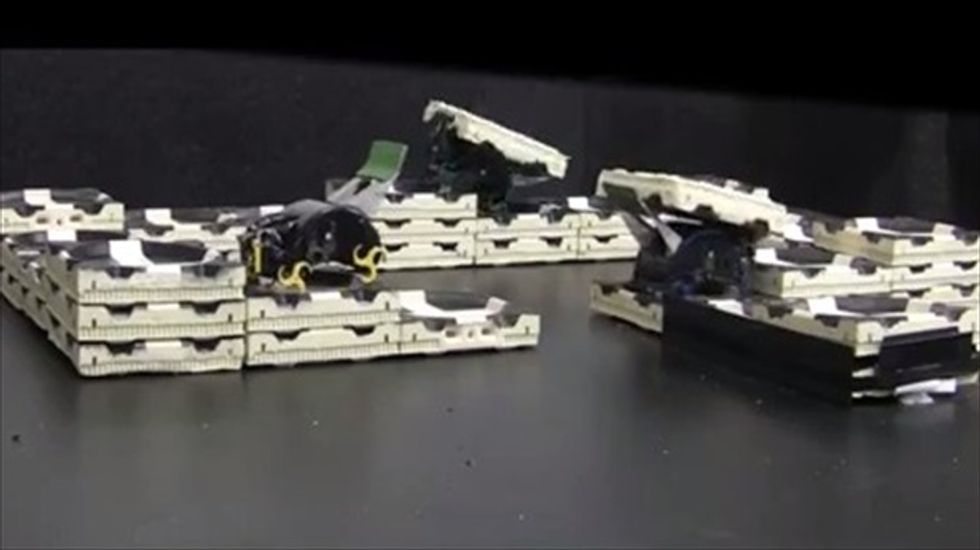 U.S. scientists showed off tiny robots Thursday that can tackle tasks much like real-life termites, working collectively to build structures without following orders from a boss.

The mechanical creatures can tote bricks, build staircases or construct a pyramid, scientists from Harvard University said at the American Association for the Advancement of Science annual meeting.

Some direction is needed for the technological termites, known as TERMES, which were built as part of a four-year project that was detailed in the February 13 edition of the journal Science.

Rather than obeying direct orders from an overseer, the robots rely on a concept known as stigmergy, which is a kind of implicit communication whereby the machines observe each others' changes to the environment and act accordingly, researchers said.

"You can give the robots, in effect, a picture of what you want them to build," explained Justin Werfel, a research scientist at Harvard University's Wyss Institute for Biologically Inspired Engineering.

"And it doesn't matter how many of them there are or whether that number changes or which robot does what and when," he told reporters.

"Together, they will wind up building what you asked for."

Equipped with three motors, each of the robots has limited sensing ability that only gives information about the machine's direct surroundings.

One robot on the team works in parallel with others, without knowledge of the overall process -- who is building what, or where.

But somehow, it works, and a statement by the science team described the project as "an important proof of concept for scalable, distributed artificial intelligence."

Someday, far in the future, Werfel and co-author Kirstin Petersen, a graduate student at Harvard, hope the robots will be able to build things people needs in places humans may not be able to go, such as constructing habitats on Mars, or laying sandbags ahead of a flood.

"We co-designed robots and bricks in an effort to make the system as minimalist and reliable as possible," said Petersen.

The project is not the first of its kind and other robotics that follow similar processes have been designed for years.

But what is different here is the way it closely mirrors the processes of termites, which build massive and elaborate mound colonies 500 times their own size without any apparent instruction from a leader.

"This system is extremely elegant, as it allows the autonomous construction of any predefined structure with simple robots," said an accompanying editorial in Science by Judith Korb, a professor of evolution and ecology at the University of Freiburg, Germany.

Watch a video demonstration of the TERMES' abilities, as posted online by Harvard on Thursday, below.