Nokia bows down to Android in low-cost phone battle 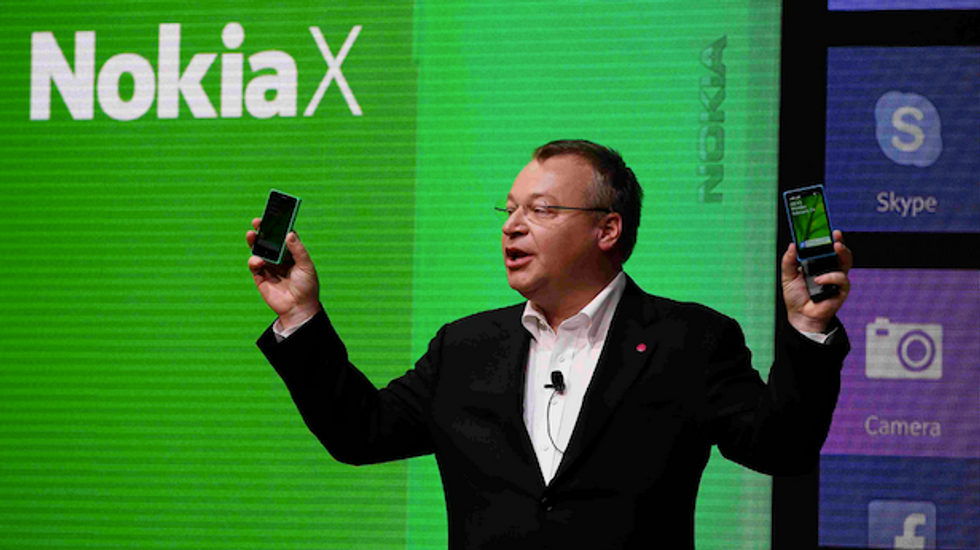 Nokia, soon to be acquired by Microsoft Corp, is turning to software created by arch-rival Google for a new line of phones it hopes will make it a late contender in the dynamic low-cost smartphone market.

Its first models, Nokia X, X+ and XL, rely upon an open version of the Android mobile software system created by Google that has become the world's most popular software used in smartphones.

The release of the phones just days before Nokia sells its handset business to Microsoft in a $7.2 billion deal, is an attempt to stay relevant in emerging markets, where low-cost Android phones are being snapped up by hundreds of millions of buyers.

Nokia Chief Executive Stephen Elop said the market had "shifted dramatically," and the group needed to address a sub-$100 segment that is set to grow four times faster than more expensive phones.

He told a crowded press conference at the Mobile World Congress trade fair in Barcelona that rather than being an 180-degree turn in its strategy of using Microsoft's Windows Phone for smartphones, it was a move that introduces the "next billion" users to Nokia's hardware and Microsoft's services.

"We see the X family being complementary to (Windows Phone) Lumia at lower price points," he said. "Even as you see Lumia push lower and lower, you will see us push lower with Nokia X below that."

But the strategy shift underlines the many missteps made by the Finnish company since Apple launched its ground-breaking iPhone in 2007.

"That a company soon-to-be owned by Microsoft, the creator of the original operating system, is moving to Android is almost an "admission of failure," he said.

In the past year, Apple shipped 153.4 million smartphones worldwide for a 15 percent share of the market, making it the second largest smartphone platform after Android.

In February 2011, Elop famously compared Nokia's failing smartphone strategy -- based on multiple software platforms of its own making -- to a man on a burning platform.

He chose to jump into the arms of Microsoft, producing high-end Lumia-branded smartphones that have been well received by critics, but less popular with customers and app developers, the people who make the software that turns phones into multi-purpose tools.

Elop said on Monday he had not jumped the wrong way.

"There's quite a lot of vendors ... who made the Android decision but couldn't differentiate," he said. "We wanted to build with Microsoft a third ecosystem, and that's what we are doing while others fall by the wayside."

But the Microsoft technology does not work on the chip sets found in cheaper smartphones, the fast-growing market crowding out Nokia's Asha feature phones, which lack the full Internet capabilities of smartphones.

The company rejected Android three years ago, when it tied its fortunes to Microsoft's Windows Phone. But Monday's announcement shows it has quietly been working on an open Android device for months.

"Our fans oftentimes tell us 'We love your hardware, we love your products, but we also love our Android apps,'" he said. "Can you make something happen so the Android apps magically run here?'"

IDC analyst Francisco Jeronimo said Nokia had a made a "rational move" that allowed it to address a much bigger market, but it should have been made three years ago. "It would have given Nokia a complete different position from where it stands today, under Microsoft's control," he said.

The Nokia X family uses the open source version of Android, which runs most apps without the right to customize Google's basic software.

For Nokia, it was a question of making this humiliating reversal in its strategy or facing irrelevance in this category of phones, Wood said.

The open version of Android software means that the new Nokia phone does not have rely on Google's services and access to the Google Play app store. Instead, Nokia is bundling it with its own music and map offers, and Microsoft's email, cloud, messaging and search services.

Apps will be available in Nokia's own app store, as well as a host of other app stores, Elop said.

The look of the Nokia X devices is starkly different from the usual Android phone, with nods to Lumia and Asha interfaces.

Elop said rather than confusing customers, Nokia X -- where X indicates a cross between Nokia hardware, Android apps and Microsoft services -- will be a stepping stone to Lumia, and will share the same cloud services.

"Lumia continues to be our primary smartphone strategy," Elop said. "Lumia is where we will continue to introduce the greatest innovation.

Wood said Nokia and Microsoft had an advantage over other users of open Android, such as some Chinese manufacturers, in that they had a ready-made set of services that they could slot into the phone.

"It means Nokia is able to participate in that entry-level space, but our view is they will try to push Windows Phone down into that space as quickly as possible," he said.

Nonetheless, devices running an open Android operating system will not sit easily within Microsoft, whose fortune is founded on the core belief that software should be paid for.

The Nokia X, which has a four-inch screen, will be available immediately, Nokia said. The X+, with more memory and storage, and XR, which has a five-inch display, will be on sale early next quarter priced at 99 euros and 109 euros, respectively.

They will be on sale in all markets apart from Japan and Korea, where Nokia is not present, and North America.