O'Reilly: Why don't you talk about black families? Obama: I do, but you're not listening 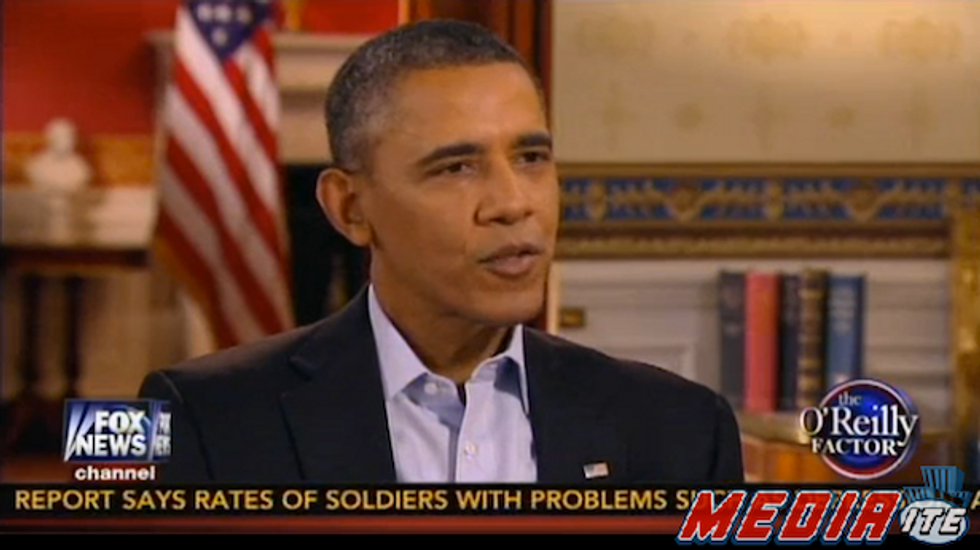 President Barack Obama repeated his assertion to Fox News host Bill O’Reilly that the conservative network unfairly covered his administration in the second part of a combative interview.

“Absolutely,” Obama said when the host asked if he’d been unfair. “Of course, you have, but I like you anyway, Bill.”

O’Reilly asked the president to cite a specific example, and Obama suggested the interview they were conducting, the first half of which aired Sunday prior to the Super Bowl. Other portions aired Monday night during "The O’Reilly Factor."

“We’ve just run through an interview in which you asked about health care not working, IRS where we (are) ‘wholly corrupt,’ (and) Benghazi,” Obama said, citing issues that have received far more coverage on Fox than other outlets. “So the list of issues that you talk about, they’re defined by you guys in a certain way.”

O’Reilly pointedly asked Obama why he had failed to address the issue of family dissolution – particularly among black families – as a contributing factor to poverty.

He told O’Reilly that his administration was convening groups of philanthropists and business people who wanted to address those issues on a city-by-city basis.

O’Reilly asked Obama if he was the most liberal president ever to serve.

“Probably not, that’s fair to say,” Obama said. “You know, the truth of the matter is, is that when you look at some of my policies, in a lot of ways, Richard Nixon was more liberal than I was. Started the EPA. You know, started a whole lot of the regulatory state that has helped make our air and water clean.”

O’Reilly said he was surprised the president didn’t cite Franklin D. Roosevelt as more liberal than himself.

“Well, FDR (and Lyndon B.) Johnson, but I tend not to think about these things in terms of liberal and Democrat — or liberal and conservative -- because at any given time, the question is, what does the country need right now?” Obama said. “Right now what the country needs is roads, bridges, (and) infrastructure. We’ve got $2 trillion worth of unmet needs. We could be putting construction workers back to work right now, folks that you like to champion. Why aren’t we doing it? That’s not a liberal or conservative agenda.”

O’Reilly suggested that the national debt was too burdensome to create additional government spending, but the president argued that lawmakers were unwilling to make decisions.

“You know, Bill, the point is, we have not massively expanded the welfare state, that’s just not true,” Obama said. “When you take a look at it, actually, that the levers of support that we provide to folks who are willing to work hard, they’re not that different than they were 30 years ago, 40 years ago, 50 years ago.”

Watch the rest of the interview posted online by boomnews: