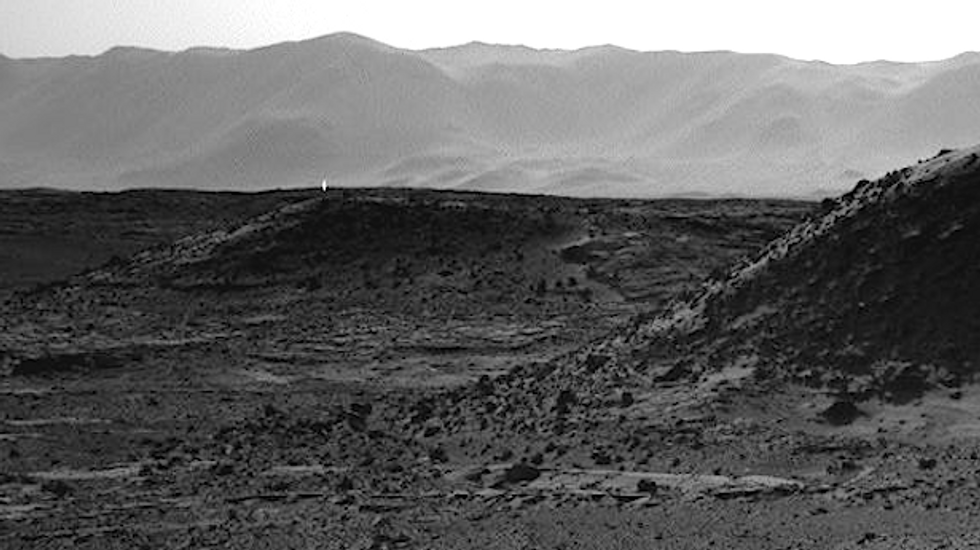 NASA cameras have captured what appears to be artificial light shining on the surface of Mars.

The photo was taken last week by one of two NASA rovers on the surface of the planet and beamed back to the Jet Propulsion Laboratory in Pasadena, Cal, reported the Houston Chronicle.

The space agency has not yet issued an official statement about the light, but UFO bloggers are excited by the photo.

"This could indicate that there is intelligent life below the ground and uses light as we do," said Scott C. Waring on his UFO Sightings Daily blog. "This is not a glare from the sun, nor is it an artifact of the photo process."

Waring described the light as flat on the bottom and shining upward, as if from the ground.

Experts weighed in later Tuesday, with most agreeing the light seen in the image was produced by a cosmic ray hit.

These subatomic particles deposit energy that is detected by cameras, although Earth’s atmosphere absorbs most of them, leaving a mark on the resulting image.

The rover actually shoots images in “stereo,” with one on the left and another on the right, and the right-hand camera captured a similar phenomenon two days in a row while the left-hand camera did not record the strange light.

"The fact that it's in one 'eye' but not the other means it's an imaging artifact and not a real 'thing' in the terrain. Period," said Doug Ellison, the NASA expert.

The Curiosity rover drove the last 98 feet Wednesday needed to arrive at “the Kimberly,” a spot where it will study geological clues about ancient environments that may have been favorable for life, the space agency said last week.

Four different types of rock intersect at the Kimberly, which is named for a region in Australia, and NASA had planned for more than a year to place the rover on a higher elevation there to examine rock outcrops.

The Curiosity rover has driven 3.8 miles since its August 2012 arrival at the planet’s Gale Crater.

It will move on later to examine outcrops at the slope of Mount Sharp inside the crater to learn more about habitable past conditions and environmental changes on Mars.

Samples collected from a previous stop at Yellowknife Bay found signs of an ancient lakebed environment with the chemical ingredients and energy necessary for life.

Watch this video about the light posted online by Thelifebeyondearth:

The partisan review of the 2020 presidential election by former Wisconsin Supreme Court Justice Michael Gableman — which is based on unfounded claims of election fraud — is straining local election administrators and damaging the state's political process, according to Dane County Clerk Scott McDonell.

For weeks, Gableman has flipped back and forth over whether or not he will require clerks across the state to testify, in private, in front of him and his staff. He's also flipped back and forth over his ability to provide immunity to those who testify or even if he has the power to prosecute people as an appointed special counsel. He has also requested thousands upon thousands of records that don't exist, have already been turned over to the Assembly elections committee or would damage election security in the state if clerks complied with Gableman's requests, McDonell says.