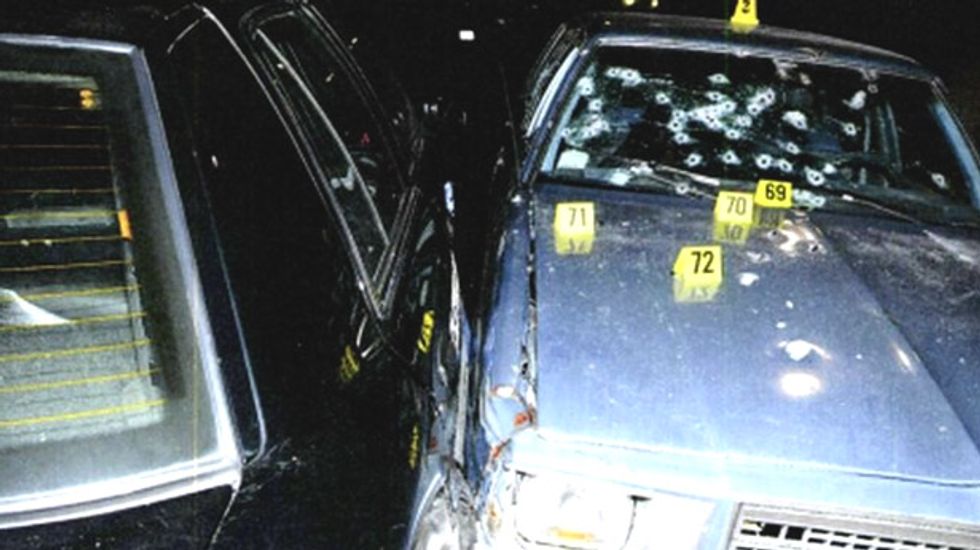 Six Cleveland police officers were indicted on Friday on charges related to a November 2012 car chase that left two suspects dead after officers fired 137 times upon them after their car came to a halt in a schoolyard , according to WSLS10.

Officer Michael Brelo has been charged with two counts of manslaughter after prosecutors claimed he stood on the hood of the suspects' car and fired at least 15 shots through the windshield. Five police supervisors were charged with dereliction of duty for failing to control the chase.

Previously 64 of the 104 officers, including twelve supervisors, involved in the chase were disciplined for violations of department rules. One supervisor was fired and two were demoted.

Driver Timothy Russell was shot 23 times. Passenger Malissa Williams was shot 24 times. Police officers claimed the suspects fired upon them, however no gun was found on them or in their vehicle.

McGinty said  other officers on the scene had stopped firing after the chase ended.

The chase, which lasted 23 minutes and covered twenty miles through Cleveland at speeds of up to 110 mph, involved five dozen cruisers and 104 of the 277 Cleveland officers on duty that evening.

According to prosecutors, Brelo fired 49 shots. None of the other 12 officers who fired shots were indicted.

Brelo, who served in Iraq as a Marine,  stated he feared for his life and the life of his partner, Officer Cynthia Moore.

"I've never been so afraid in my life,'' he told investigators. "I thought my partner and I would be shot and that we were going to be killed.''

"I was just -- even during Iraq, I never fired my weapon,"  Brelo added." I've never been so afraid in my life, and I just couldn't understand why the suspects were still moving and still shooting at us.''

The police union has defended the officers' actions and said the driver was trying to ram them.

Capt. Brian Betley, the head of the Fraternal Order of Police, told the Cleveland Plain Dealer that he was disappointed in the grand jury's findings.

Watch the video below of Officer Michael Brelo being interviewed by investigators from WKYC: