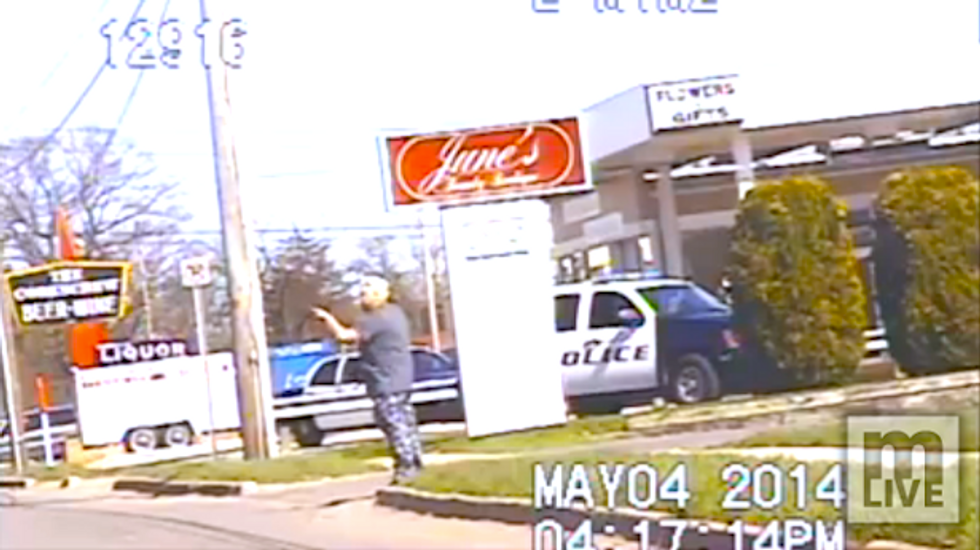 Police stopped a rifle-toting Michigan man last month who was apparently intoxicated and warning of revolution, but they eventually decided not to charge him.

Officers were called May 4 after several witnesses reported the man walking along a street in Kalamazoo with the weapon, and police stopped the man for a jaywalking violation.

It’s legal to openly carrying guns in Michigan, but it’s illegal to brandish one – which police described as “waving or displaying the firearm in a threatening manner.”

The first officer on the scene, Sgt. Sean Gordon, asked 63-year-old Joseph Houseman to place his weapon on the ground, but the man refused.

Another officer arrived shortly afterward, and Gordon asked Houseman for his name – which he claimed was “Joe Schmoe.”

"Based on training and experience I know that this is a euphemism used as an alias and knew it was not correct," Gordon said in his report.

Gordon told Houseman he had possibly committed misdemeanors because he had resisted arrest and obstructed official business.

“Why don't you (expletive) shoot me?” Houseman said, but Gordon told him he did not intend to do that.

Houseman called police officers “gang members” with a “history of violence,” and he claimed a revolution was imminent.

The video also shows him grabbing his genitals and making lewd gestures toward Gordon.

Twelve officers eventually came to the scene, and Gordon turned over negotiations to a trained SWAT negotiator.

Police took up defensive positions behind their vehicles and closed down Cork Street in both directions as they spoke to Houseman, who held the rifle in “parade arms” position on his shoulder but shifted it from one hand to another.

Houseman also fumbled with the gun as he reached for chewing tobacco in his pocket.

He finally agreed to sit down and place his gun on the ground, and he allowed an officer to approach him and take his carbine rifle, which the officer found was unloaded.

But Houseman asked for the rifle back after the officer crosses the street, and the officer said he would return the gun if Houseman submitted to a Breathalyzer test.

Houseman refuses, and the officer tells him it’s against the law to carry a gun while intoxicated.

The officer offers to let Houseman walk home and pick up his gun the next day or drive him home and continue the discussion there, but the man declines both offers.

Houseman reacts angrily when the officer suggests he’s mentally unstable, although he admits he was wrong to tell the officers he hated them and warn them of revolution.

But he claimed a First Amendment right to threaten and scream profanity at police while holding a rifle in his hands.

Police eventually told Houseman, who said he and his grandson had demonstrated their right to openly carry firearms the following week, that he was free to go and could pick up his rifle the next day at police headquarters.

“You were detained initially because the officer was trying to have a conversation with you, a legal, lawful, allowed, non-intruding Fourth Amendment conversation, and when you start screaming obscenities and grabbing your genitals armed with a rifle, you crossed the line,” said Lt. Stacey Geik.

Houseman apologized and said he had a bad attitude because “we’re losing our rights.”

“They might as well put up a billboard right now that says the Second Amendment is junk because of people like this,” Geik said.

Houseman agreed to meet with police the following morning to pick up gun, and he then apologizes and shakes hands with the officer.

Watch this video of the encounter posted online by the Kalamazoo Gazette: