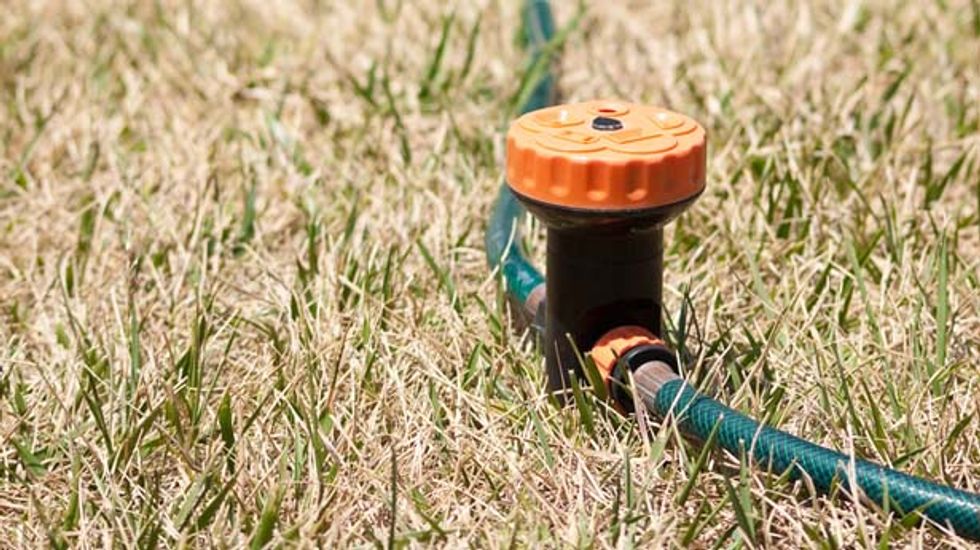 On the same day that the California state water board instructed water agencies to adopt emergency drought plans -- with fines of up to $500 a day for water wasters -- a Southern California couple received a  letter from their local government threatening a $500 penalty for not watering their dying lawns.

Laura Whitney and her husband, Michael Korte, of Glendora, received a letter from the city warning them they could be subject to a $500 penalty for not watering their brown lawn, according to the Sacramento Bee.

According to Whitney, the letter said, "Despite the water conservation efforts, we wish to remind you that limited watering is still required to keep landscaping looking healthy and green."

Whitney and Korte have been given sixty days to restore their lawn.

"My friends in Los Angeles got these letters warning they could be fined if they water, and I got a letter warning that I could be fined for not watering," Whitney said. "I felt like I was in an alternate universe."

Whitney and Korte find themselves in a dilemma becoming all to common; homeowners acting responsibly in the midst of the worst drought to hit California in recent history and the demands of cities and homeowner's associations  that residents keep up the appearances of their yards.

Nearly 80 per cent of the California is considered to be under "extreme" and "exceptional" drought conditions -- the highest categories -- forcing the state water board to take drastic measures.

A recent survey conducted by the State Water Quality Control Board showed that water consumption has actually risen despite pleas from the governor to conserve.

Announcing the emergency drought plans, Felicia Marcus, chairman of the board said, "Our goal here is to light a fire under those who aren't yet taking the drought seriously."

Marcus added, "A brown lawn should be a badge of honor because it shows you care about your community."

Recognizing that the state and cities might have conflicting interests, Democratic Assemblywoman Cheryl Brown (D-San Bernardino) introduced a bill that would have prohibited local governments from imposing fines, but she discontinued her efforts after cities in her  district promised not to penalize homeowners for brown lawns during the drought emergency.

Hearing it has become an issue in other communities, Brown is considering reviving the bill.

"It seems to me those cities aren't using common sense," Brown said. "It's too bad you need a law."

[Watering The Lawn on Shutterstock]