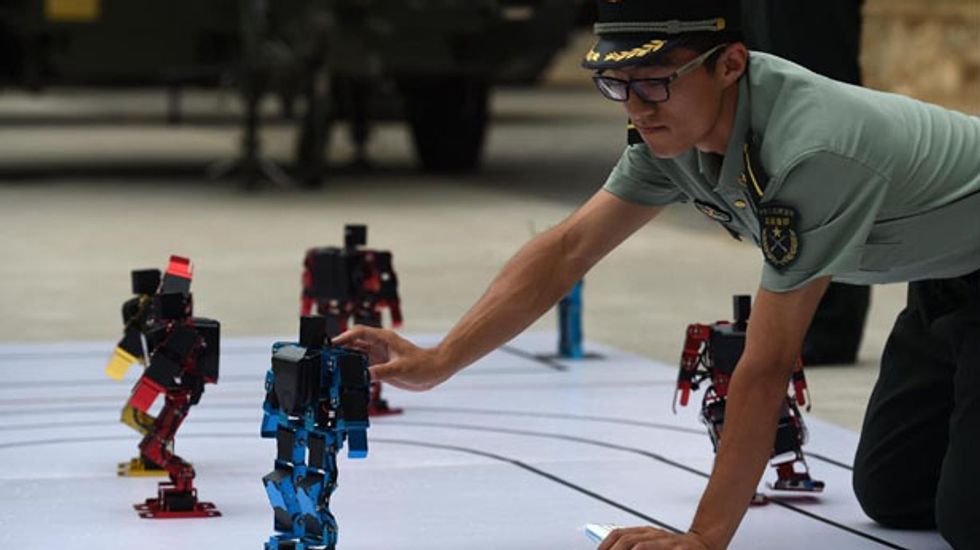 To the sound of Shakira's Waka Waka (This Time for Africa) robots demonstrated their dance steps, screaming recruits drilled with bayonets and tanks rolled as China's military offered a rare moment of openness Tuesday.

The exposition, held at the Armoured Forces Engineering Academy in Beijing, was touted by senior People's Liberation Army (PLA) officials as an opportunity to burnish civilian-military and international ties ahead of Army Day, the August 1 commemoration of the Communist-led army's founding.

"The most important thing is that we have mutual understanding," Liu Degang, the academy's vice president, told AFP. "We undergo training just like every other country in the world. We also love peace."

A promotional guide for the event, described as the first of its kind at the academy that foreign media had been allowed to attend, noted that "cadets, instructors and commanders would like to be interviewed".

Young soldiers chatted with reporters while showing off technological projects including drones and small Transformer-like robots in bright primary colours.

The dancing machines' military purpose was not explained, but the opening lyrics of the Colombian singer's 2010 World Cup anthem used as their backing track run: "You're a good soldier/Choosing your battles/Pick yourself up and dust yourself off/And back in the saddle.

Hanging over the event's convivial atmosphere were questions about China's ballooning military spending, its tense relations with rival Japan and a much-publicised anti-graft campaign that has swept up one of the Chinese army's most powerful officials.

A fearsome procession of 10 rolling tanks -- intended to showcase the PLA's military prowess -- also held echoes of the most memorable image from the 1989 Tiananmen Square crackdown on pro-democracy protesters, a subject about which any public discussion has long been banned by the ruling Communist Party.

Its official military budget -- which in recent years has seen regular double-digit rises -- last year came to $119.5 billion, far short of the US's $495.5 billion but nonetheless sparking concern in the region.

China and Japan have long been at odds over what Beijing sees as Tokyo's failure to atone for its military atrocities before and during World War II.

In recent weeks, China has been releasing daily "confessions" by Japanese war criminals convicted in the 1950s, while state-run media have intensified criticism of Tokyo.

At the same time, tensions are mounting between the two over disputed islands in the East China Sea, as well as between Beijing and Hanoi, Manila and others over territorial claims in the South China Sea, raising fears of clashes.

Much of the recent military focus has been on the navy, with China's first aircraft carrier going into service in 2012 but the academy's commandant Major-General Xu Han denied that tanks and other ground vehicles are becoming obsolete as combat increasingly moves to the skies and seas.

"In mechanised warfare or informationised warfare, the army and ground operations are an important and decisive component," he said.

He described last month's ouster for graft of powerful retired general Xu Caihou, the former vice-chairman of China's Central Military Commission as "an individual case about corruption which does not represent the overall image of the PLA".

"This is a problem which has existed since ancient times in all countries," he said.

The anti-graft campaign under Chinese President Xi Jinping has been heavily publicised, but critics say no systemic reforms have been introduced to increase transparency to help battle endemic corruption.

The academy is close to the Marco Polo Bridge on the outskirts of Beijing, where a skirmish between Chinese and Japanese troops on July 7, 1937 served as a pretext for Tokyo's forces to seize Beijing and launch a full-scale invasion of China.

At an opening briefing for Chinese and foreign reporters, Xu was asked to explain the rationale behind China's military buildup and whether Beijing had a particular "enemy" in mind.

"It is not necessary to pick an enemy or an opponent in combat while developing one's military," he replied. "I think for the PLA's development, it is in coordination and consistent with the overall development of China."

A video highlighted the work and education of the academy’s cadets, to a soundtrack of invigorating music.

Their work, it declared, is aimed at "ensuring the happiness of the Chinese people and maintaining the peace of the world".