John Oliver: US prisons are full because 'our drug laws are a little draconian, and a lot racist' 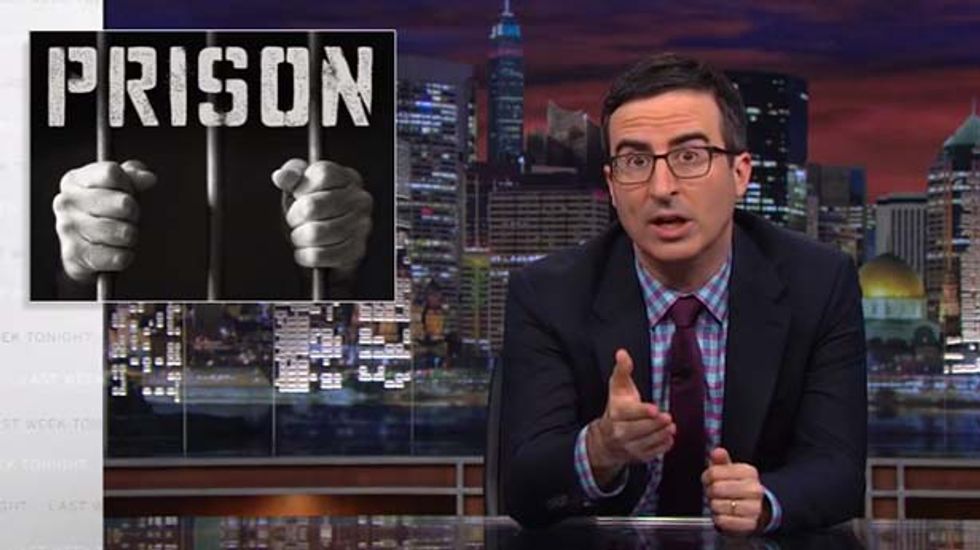 On an extended segment on HBO's Last Week Tonight, host John Oliver tackled the subject of America's prison system -- from high incarceration rates due to "draconian" drug laws to prison rape and privatization.

Oliver began by pointing out that America has more prisoners than any other country in the world, with nearly one in every 100 adults in America incarcerated.

"That's true. We have over 2 million behind bars right now," Oliver explained. "We have more prisoners at the moment than China. Than China. We don't have more anything than China other than, of course, debt to China."

Pointing out that America's prison population has expanded eight-fold since 1970, Oliver stated, "The only other thing that has grown at that rate, since the seventies, is varieties of Cheerios. F*ck you, Fruity Cheerios, you're trumped up Froot Loops, and you know it!"

Noting that over 50 percent of America's prison population is incarcerated on drug charges, Oliver said "Our drug laws are a little draconian, and a lot racist."

"While white people and African-Americans use drugs at about the same amount, a study has shown that African-Americans have been sent to prison for drug offenses at up to ten times the rate for some utterly known reason," Oliver said, drawing laughter from the audience.

"It reminds me of a joke. Black people who commit drug offenses, they go to jail like this," Oliver said, miming hand held together with handcuffs. "Whereas white people ... don't go to jail at all."

Oliver pointed out that so many people are incarcerated in America that Sesame Street is forced to to explain prison to children.

"Just think about that," Oliver asked. "We now need adorable singing puppets to explain prison to children in the same way they explain the number seven or what the moon is."

Addressing prison rape, calling it the "most horrifying things that can potentially happen," Oliver shared a collection of clips from popular TV shows and movies -- including children's cartoon Spongebob Squarepants -- making light of rape.

Oliver continued on, discussing the privatization of prisons leading to inadequate medical care, increased prison deaths, maggots in food served by outside vendors, and for-profit publicly-traded companies that run prisons pitching investors on growth opportunities due to the lure of high recidivism rates.