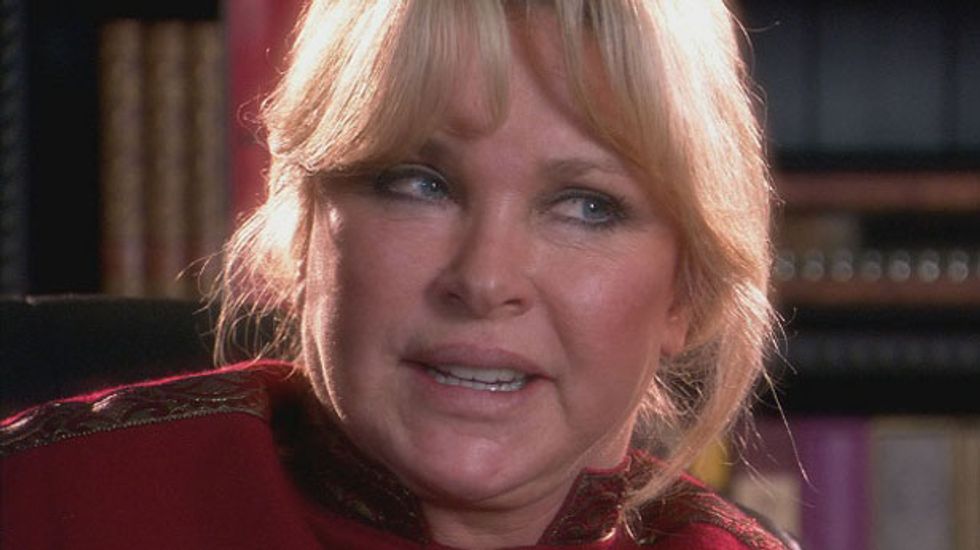 The leader of a New Age consciousness and enlightenment school, who channels the voice of a 35,000-year-old Lemurian warrior when speaking to her followers, is suing two former students after they posted a drunken rant by her saying Jews have enough money to "have paid their way out of the goddamned gas chambers by now," and Mexicans breed "like rabbits," among other slurs.

JZ Knight, a 65-year-old former rodeo queen and cable TV saleswoman who heads the Ramtha School of Enlightenment (RSE) in Yelm, Washington, is suing ex-students Virginia Coverdale and David McCarthy for uploading live-streamed video from a 2011 Ramtha 'channeling' that turned into a drunken bigoted diatribe, according to Susy Buchanan of the Southern Poverty Law Center.

“Fuck God’s chosen people! I think they have earned enough cash to have paid their way out of the goddamned gas chambers by now,” Knight told her students in the released video. Knight explained “I’m telling you this, every goddamn Mexican family is a Catholic—they’re breeding like fucking rabbits,”  before adding that "all gay men were once Catholic women."

Knight delivered her speech while students followed her in a drinking game, taking a drink of wine every time she did. Wine ceremonies have been a ritual at RSE since 1996, where students are taught to believe that wine grapes were brought to Earth by extraterrestrials 450,000 years ago.

JZ Knight, born Judith Darlene Hampton in 1946 in Roswell, New Mexico., encountered Ramtha the warrior in 1977 while experimenting with construction paper pyramids. According to her biography, she placed a pyramid on her head and Ramtha, a 7-foot-tall apparition of golden glitter clad in a purple robe, appeared in her kitchen.

“I am Ramtha the Enlightened One. I have come to help you over the ditch,” he told her.

Early students included Shirley MacLaine (who broke off contact with Knight 30 years ago, according to a spokesperson for the actress), and actors Richard Chamberlain and Mike Farrell. According to RSE officials, actresses Salma Hayek and former “Dynasty” star Linda Evans are current students.

Knight has grown wealthy over the years, purchasing the ranch in Yelm where the school is located. According to RSE, the land was once part of ancient Lemuria during Ramtha’s lifetime, before he migrated to Atlantis and freed his people from tyranny at the age of 14. Ramtha then went on to conquer two-thirds of the world at the head of an army of 2.5 million, before spending seven years meditating and then ascending like Jesus.

According to Knight’s Manhattan Beach, Calif.-based PR firm, "Since the school was founded in 1989, more than 86,000 people worldwide have attended RSE events including about 7,500 in Washington State." Approximately 2,000 students live near Yelm, a town with a population of close to 7,000.

At the school, students are taught the four tenets of Ramtha’s philosophy: the statement, ‘You are god’; the mandate to make known the unknown; the concept that consciousness and energy create the nature of reality; and the challenge to conquer yourself.

Knight also teaches students to hoard gold and prepare food and supplies to survive for two years following one of the natural disasters that she often predicts will hit the earth. Knight, as Ramtha, is also a believer in the “New World Order” making her a favorite of white nationalist website Stormfront, which lists her writings under headings such as “Jews were responsible for causing WW1 & 2.”

Recently followers have become disenchanted with Knight's drunken rambling, feeling this is not the enlightenment they are seeking.

In the 16-hour video released by the ex-students, a drunken Knight proclaims, "Fuck Jehovah,” in Ramtha’s voice, before claiming Jesus as a fellow alien who came to Earth to teach the same basic philosophy.

From the same stage, an acolyte of Knight's, former priest Míceál Ledwith, calls the biblical God “fickle, capricious, psychotic, neurotic, and insecure, and we are supposed to believe that he is the creator God.”

Knight adds that God is a “psychotic, insecure son of a bitch,” before dancing onstage with Ledwith.

Former student Coverdale, currently appealing a $600,000 judgement against her from Knight and RSE, said “Although admittedly, as a rule, the cult does not have as one of its ideologies hating Mexicans or Jewish people or gay people or Catholics, JZ Knight herself is proving she does as her [drinking] increases and she is unable to keep up the love act she had going in the ’80s. It is beyond hate speech.”

“In America, there are many First Amendment rights I agree with, even if I disagree with what is being said. Where I get concerned is when you have a large group of people that believe they are hearing from a powerful enlightened entity, creating an ‘us versus them’ situation," she added.

For her part, Knight maintains the videos were heavily edited, saying "“Those tapes were illegal from the get-go, and that they were distributed, edited and chopped to make us look like bigots and hateful people when nothing could be further from the truth, nothing! I will not let other people rewrite our history!”

The video continues to keep popping up on the Internet, despite efforts by  Knight's attorneys to have it removed on copyright grounds.

Trump's 'get out of jail free' card: A second presidential run

If there's one thing former president Donald Trump knows very well, it's the fact that the Department of Justice has a hard and fast policy against indicting a sitting president. He heard it hundreds of times during the Mueller investigation from every TV lawyer in the country as well as his own, including the White House counsel. And even though the Mueller Report laid out several possible counts of obstruction of justice, clearly intended to be triggered once Trump was out of office, nothing ever happened. It's pretty clear that Trump understands the presidency to be a "get-out-of-jail-free" card. Right now he probably could use one.