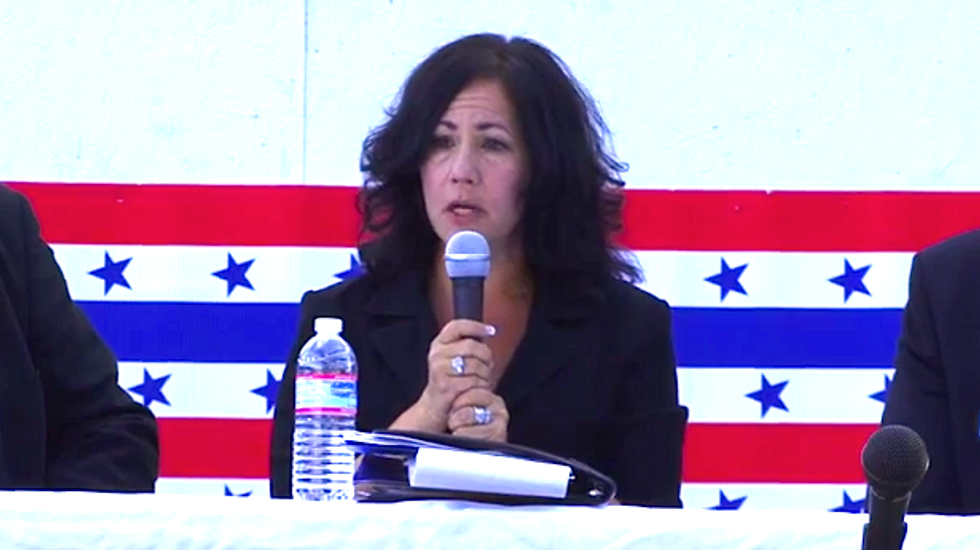 Cindy Lake, a Republican candidate for Clark County commissioner, said she became active in politics because Paul – the former Texas congressman and failed presidential candidate – mentioned during a debate that he supported the right to drink raw milk.

“I think you have a right to put whatever you would like to put into your body, if you’re a grown adult,” Lake said during a candidates forum in April, which was posted online Thursday. “I don’t think the government should tell any of us what we should eat, drink, or how to raise our children.”

Lake previously served as chair of the Republican Party in Clark County, where scofflaw rancher Cliven Bundy attracted armed militia members to back his dispute against the federal government.

She explained to voters that she would not approve any new legislation but would work instead to roll back any existing laws she didn’t like.

"Our rights are being stolen from us under the guise of ‘budgeting’ and ‘commissioning,’ and laws are passed – too many laws are passed – and regulations and fees and licenses – I’m also a Realtor, and I have pay those same business license fees," Lake said.

She said government should be as local as possible.

She complained that licensing fees and taxes punished productive workers, and she vowed to defund government agencies she claimed were “abusing” Americans.

Then the moderator asked her about fluoride in public drinking water.

“That is another one of my passions,” Lake said. “I’m completely anti-fluoride.”

She said toothpaste tubes warn against swallowing, and she said that was reason enough to remove fluoride from the water supply.

“It costs us just under a million dollars a year to add what is a toxic industrial waste chemical to our water, and we’re paying for that, when if you want it, you can certainly buy your own toothpaste that’s fluoridated,” Lake said. “I don’t want to give that to my family, and I don’t want it in my water.”

An audience member took the microphone and, gesturing toward the sky, warned that the greatest public health hazard came from chemtrails.

“Who’s polluting the county? How do we stop it? I don’t know,” the man said. “But they’re doing it all over the world, this geo-engineering. For who? What are they trying to do to the human species?”

The moderator tugged his leather jacket, and the video was edited at that point and then resumed as the man walked away from the microphone and took a seat.

“I do think an investigation has to be undertaken by the county commission and find out exactly what our role is there,” Lake said, without specifying how the investigation would be conducted or funded. “I don’t know who’s doing it; it’s a secret operation. As far as chemtrails go, I don’t want to be poisoned as much as anybody else, so I would vote no.”

Another took the microphone and explained that, as a pilot with 34 years of experience, the fears over chemtrails were unfounded.

“I respectfully asked my liberty friends to be very careful about this chemtrails thing, because to me, it’s all B.S.,” the man said. “The reason you see chemtrails like you do, is because there are thousands of planes flying overhead.”

Lake told the man they should discuss the issue later, and related an anecdote about inventor Nikolai Tesla’s so-called “death ray” that is widely shared among chemtrail conspiracy theorists.

“I’m not 100 percent sure what’s being sprayed up there, and why, if anybody was spraying us -- aren’t they spraying themselves, too?” Lake said. “I do think that there’s some validity to it. I don’t have the science to prove it, but as with drones, I think things can be used for the good and for the bad.”

“Unfortunately, the government, when they are given any kind of tool, tend to use it against the citizens to control us, so my perspective is, I wouldn’t discount it without further investigation because there is some proof to (it), from what I understand in my research,” she added.