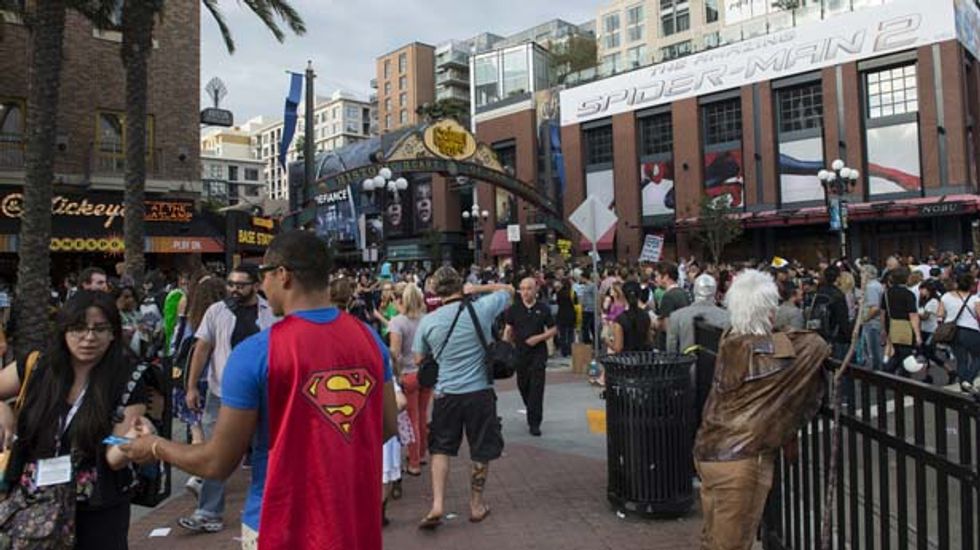 A well-known San Diego homeless advocate has accused the San Diego Police Department of running off some of the the transient San Diegans who populate the downtown area around the San Diego Convention Center before attendees of Comic-Con arrive in town.

David Ross, known in San Diego as "Waterman" for handing out bottled drinking water to the homeless living on the street, told San Diego 10 News, "People on these streets are unsightly to the public, to the general public and certainly to visitors coming in from out of town."

San Diego Comic-Con International is the largest convention of its kind in the world, drawing over 130,000 attendees over a four day period, in a celebration of comic books, film, television, and pop culture.

Ross, along with several homeless people who have been given "stay-away orders" threatening them with jail if they return to the area,  believe the city is trying to hide it's homeless problem from visitors who are expected pump hundreds of millions of dollars into the local economy via direct spending, hotel rooms, and dining in restaurants.

James Loften, who is homeless, pointed to a nearby spot where he was recently awakened and arrested.

"Officers came and woke me up at about six in the morning and told me I was under arrest for illegal lodging and encroachment," Loften said. "I'm like, 'But all I did was go to sleep.'"

Loften was forced to point out the spot from a distance for the reporter because he has been given a "stay-away order" and must avoid the area or face arrest again.

The location where Loften was staying is a well-known downtown block where homeless San Diegans congregate, pitching tents or tarps at night pushed up against a chain link fence surrounding a weed-strewn lot.

Ross says the city is trying to keep up appearances.

"They don't want to have these homeless people ...and children going, 'What are those people laying out there for, they look like they're dying'," Ross explained. "So they make a concerted effort during Comic-Con."

A spokesperson for newly elected Mayor Kevin Faulconer said the mayor spoke  with San Diego Police Chief Shelley Zimmerman who said the the claims were unfounded.

The spokesperson added that Comic Con is nearly a week away before asking "why would they crack down this early?"

Police have been dispersing the homeless community with the help of the San Diego Homeless Outreach Team, attempting to move people off the streets and into shelters.

Watch the video from News 10 below: