'Sovereign citizen' vows to outlaw Tasers as Maui mayor: 'I'm not a lunatic, I am a hippie' 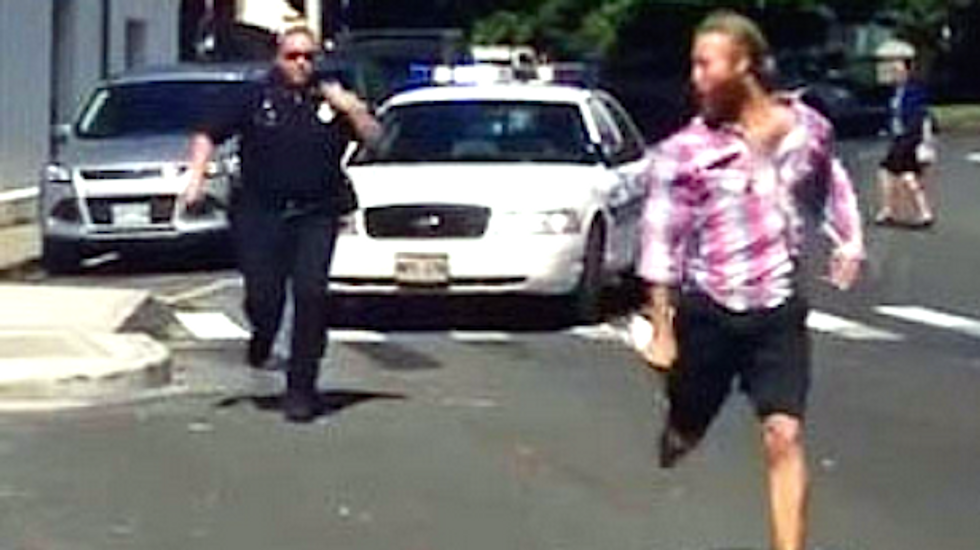 A bong-maker and self-described sovereign citizen vows to outlaw the use of Taser stun guns by police if he’s successful in his run for Maui mayor.

Beau Hawkes fell flat on his face in the street when he was tasered earlier this month during a barefoot confrontation with police that was recorded on cell phone video and widely shared on social media.

"Tasers are a violation of our human rights,” Hawkes said. “Maui county (and) the Maui Police Department will be the first police department to ban the use of Tasers.”

The 34-year-old Hawkes, who is among five candidates for mayor of the Hawaiian city, was cited July 15 for talking on his cell phone while driving without a license plate, driver’s license, registration, or safety inspection sticker.

Hawkes says he does not believe in paying taxes or participating in any activities that would ensnare him in “American commercial laws.”

"I'm not a lunatic,” Hawkes insisted. “I am a hippie. Jesus was a hippie. I walk barefoot all the time because it keeps me connected to the electromagnetic field in the earth."

Hawkes was on his way to a Maui County Council hearing on genetically modified organisms, and he said he ignored the police order to turn off his pickup truck engine because he was running late.

He noticed police following him for about a half-mile before he stopped, signed up to give testimony at the hearing, and went to run some errands while more than 60 others were scheduled to speak before him.

Police confronted him outside in an incident captured on video by Aubrey May, telling Hawkes he was under arrest and ordering him to put his hands behind his back.

The barefoot and bearded Hawkes took off running, yelling, “Come on, cop. You can’t do this.”

He reversed course, and the officer grabbed his stun gun and warned Hawkes twice that he would use the Taser.

Hawkes continued sprinting away but fell face-first onto the pavement when the officer fired the stun gun at his back.

The mayoral candidate and owner of Maui Wowie, a company that makes water pipes from bamboo, was briefly hospitalized for treatment of minor injuries, booked into jail, and released three hours later on $300 bond.

Hawkes went to check out the GMO hearing after his release, and found that he was just in time for his turn to speak -- so he did.

“You couldn’t write this stuff,” he said, adding that the events seemed “divinely inspired.”

Hawkes is actually the second challenger to incumbent Mayor Alan Ara-kawa to have a run-in with police.

Nelson Wai­kiki Jr. was arrested July 15 after a candidate debate after violating the terms of his release in another criminal case.

Hawkes said his experience serves as a wake-up call to government corruption.

An attorney who was involved in a 2006 case that set a precedent for when officers could use Tasers said he doubted Hawkes could get stun guns banned through a lawsuit, but he thinks the officer should be disciplined.

“(A court ruled) you can only use it in circumstances where the police officer is threatened with some degree of harm, or members of the public are threatened with some degree of harm," said attorney Eric Seita. "If you're dealing with somebody who merely committed traffic offenses and is not threatening the officer, as far as I'm concerned there's no question, this is an improper and inappropriate use of the Taser."

Watch video of the incident posted online by MAUIWatch: