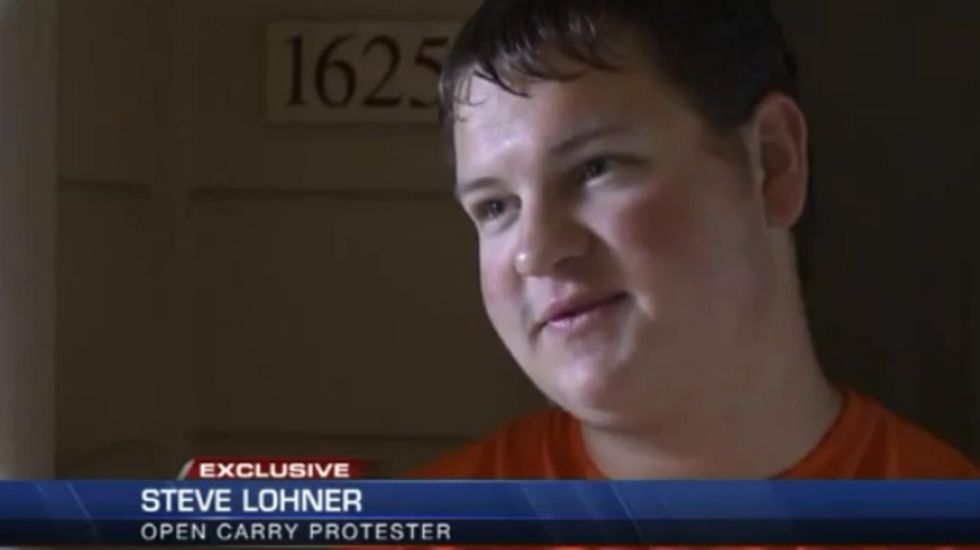 A Colorado teen, stopped by the police for toting a loaded shotgun on the streets of Aurora, Colorado where James Holmes killed 12 and wounded seventy in a packed movie theater in 2012, claims he is doing it to make the public feel more "comfortable" around guns.

Steve Lohner, 18, was recently stopped by police responding to 911 calls alerting them about the teen. When asked to provide ID proving his age, Lohner refused to do so, while videotaping the encounter (seen below) on his phone. The teen subsequently posted the video online, according FOX13.

In the video, Lohner explains to an officer that he is the process  of returning home after buying cigarettes. When asked why he's carrying a shotgun, Lohner replies, "For the defense of myself and those around me."

After asking Lohner if he's eighteen -- the legal age in Colorado to bear a weapon -- the officer asks Lohner for his ID to which Lohner refuses, asking if he's committed a crime.

According to Lohner, who says he's been stopped multiple times and never had to show ID, he's on a mission to make people more comfortable about guns.

“If enough people were to lawfully open carry in those areas and do it in a safe and lawful manner then these people would end up feeling comfortable around it,” he explained.

Lohner admitted that people might feel uncomfortable seeing a teen carrying out a gun, saying “I feel like a lot of people now they see a weapon like that and they think, you know, James Holmes or Sandy Hook.”

Police agree, with Aurora police spokesman Frank Fania saying, "It’s alarming to the citizens — alarming enough to where they call.”

Farina added, “He may be within his rights and legal, within the law to carry this gun but if we’re investigating it and he refuses to cooperate that may violate other municipal laws."

The Colorado Supreme Court has ruled that police who are investigating a suspected crime can require an ID from people reasonably believed to have information or were involved with that crime. According to police, taking time to investigate open carry displays takes them away from more serious matters.

In this case of Lohner, police couldn’t even determine if was old enough to legally possess the weapon.

Watch the video below from Fox31 Denver: