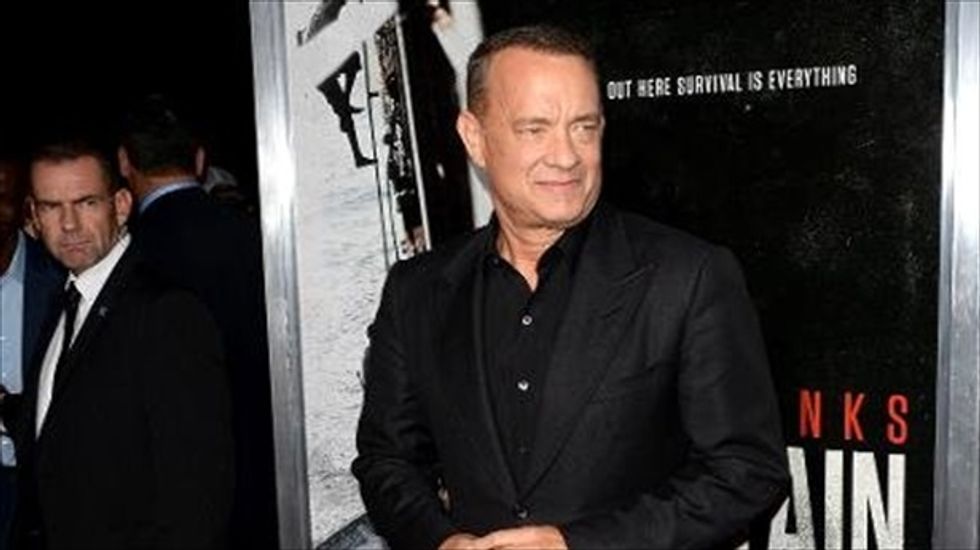 Actor Tom Hanks attends the premiere of Columbia Pictures' 'Captain Phillips' at the Academy of Motion Picture Arts and Sciences on Sept. 30, 2013. [AFP]

A new app for the iPad aims to recreate the nostalgic sense of typing on a manual typewriter, but ramped up to meet the demands of digital-age word processing.

"In the late 70s's I bought a typewriter -- portable enough for world travel and sturdy enough to survive decades of 10-fingered beatings," Hanks stated in a note shared in the app.

"I've since acquired many more -- each different in design, action and sound. Each one stamps into paper a permanent trail of imagination through keys, hammers, cloth and dye," he wrote.

The app allows users to type emails, letters, and stories on a virtual typewriter, accompanied by the sound of clanking keys as each character appears on the page beneath the type hammer.

Users can also "insert" new pages or pull pages up or down to adjust where text appears -- just as they would with an old-school manual. After text is written, it can be emailed, printed, and shared from the app.

The free app includes one style of typewriter with two more on offer featuring different sounds, visuals, ribbon colors and other features, at $2.99 each.

According to Clinton Mills, co-founder and chief executive officer of Hitcents, the Bowling Green, Kentucky-based creative agency that developed the app, the appeal lies in hearing the rhythm of one's work.

"Whenever you type, the sounds the typewriter makes you feel like you're composing something special," he said.

Mills said that Hanks was actively involved throughout the creative process and often came up with solutions to challenges.

"He wanted to create a product that gave the nostalgia of a typewriter, but also composed well," said Mills, adding that Hanks "didn't want it to be gimmicky."

The actor uses typewriters daily and has even written several screenplays with vintage devices, Mills said.

The company plans to continue developing the app and will add more keyboards to the three now available.

Several other typewriter apps such as TypeWriter for Android devices and miTypewriter for Apple Inc's iPhone and iPad replicate the sound and visuals of a typewriter. They cost between $0.99 and $1.99. The free Electratype for iPad is a virtual typewriter app for creating greetings that can be shared via email or social media.

While the app was the top downloaded iPad app in the United States last week, some question its staying power.

Toronto-based journalist David Hayes, a typewriter collector and aficionado, is skeptical about the app's staying power.

"I grew up learning how to type on a typewriter. I still have the one I learned to type on, a Remington No. 2 from 1921, so I've experienced the romantic clickety-clack of the keys, ringing of bells and wonderful feeling of the keys as you type, called 'action,'" he explained.

It is that action that cannot be replicated via a touchscreen or keyboard, Hayes said.

He also noted that while he appreciates the typewriter's iconography and history, the ones he collects are mainly decor.

"As soon as computers came along, I didn't see the point," Hayes said. "I consider them 'objets d’art.'"