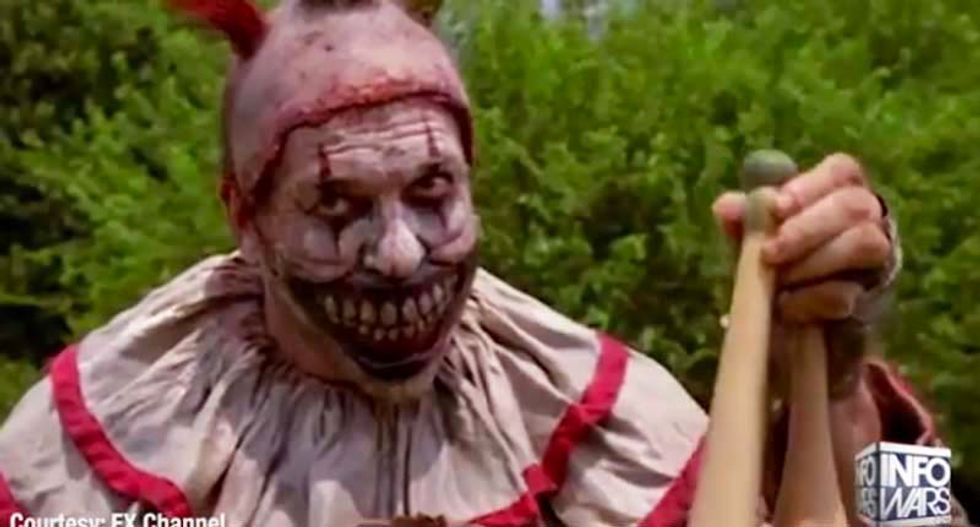 According to a video produced by InfoWars, the website run by conspiracy theorist Alex Jones, rising youth unemployment worldwide is behind a wave of violence committed by idle young people with few prospects and too much time on their hands.

After noting that "armed psychopathic clowns are becoming a worldwide phenomenon," the narrator begins his history of the rise homicidal clowns with John Wayne Gacy; described as a "former Democratic party member and psychopathic clown, known as Pogo the Clown," who killed at least 33 young men between 1972 and 1978.

Leaping forward, we are told the next sighting of an  "evil clown" occurred in Carrickfergus, Ireland, in 2013 when a man who was scaring children while dressed as a clown turned himself into police.

Recently creepy clowns have been spotted in Bakersfield, California, possibly inspired by the Wasco Clown; part of a man and wife photography project. Additionally, several towns in the south of France have been dealing with teens dressed as clowns and menacing passers-by with  fake weapons.

Infowars coupled viral prank videos depicting people being terrorized by clowns and  the popularity of American Horror Story -- which features the horrifying speechless Twisty the Clown -- to high unemployment numbers worldwide for the crazed clown phenomena.

"Spain has a youth unemployment rate of 56%, France’s is 26% and the United States comes in at 13%," the website proclaims. " As the fabric of society is torn apart by corporate piracy and inadequate leadership, we will see a rise of killer clown attacks by large portions of global society with nothing to lose."

Watch the video below uploaded to YouTube by The Alex Jones Channel: