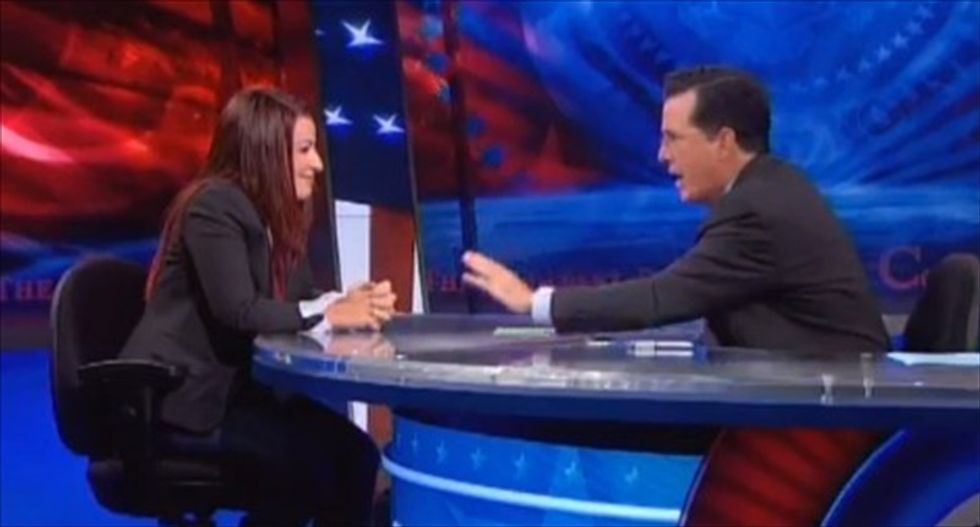 Stephen Colbert took it upon himself to "defend" GamerGate in an interview with video game critic Anita Sarkeesian on Wednesday.

"It's a sub-culture war," Colbert told her, arguing that feminists like her were attacking gamers "for enjoying looking at big-breasted women with tiny armor that barely covers their nipples. What is wrong with that? I like what that looks like."

Sarkeesian explained that what GamerGate is responding to are the people challenging the idea that video games have to be a "Little boy's club."

"There's many of us women who have been playing games our whole lives," Sarkeesian said. "So they're lashing out because we're challenging the status quo of gaming as a male-dominated space."

Colbert also asked Sarkeesian to respond to the allegation that she and other feminist critics are colluding with media outlets to compromise "ethics in gaming journalism."

"What if there was no ethics in Hollywood journalism?" he asked her. "If we can't trust Entertainment Tonight or TMZ, where would we be? Is that what you want for gamer journalism?"

"That is a sort of compelling way to reframe the fact that this is actually attacks on women," said Sarkeesian, who has been forced to leave her home and cancel a public appearance after being threatened for her work. "Ethics in journalism is not what's happening in any way. It's actually men going after women in really hostile, aggressive ways."

Colbert also argued that GamerGate supporters were, in their own eyes, defending their "traditional gamer lifestyle."

"Yes, there's a 'traditional gamer lifestyle,'" Colbert said. "God ordained that it is one man, one joystick. Read your Bible, folks -- it's right there in Sega Genesis."

Watch the interview, as posted by The Mary Sue on Wednesday, below.