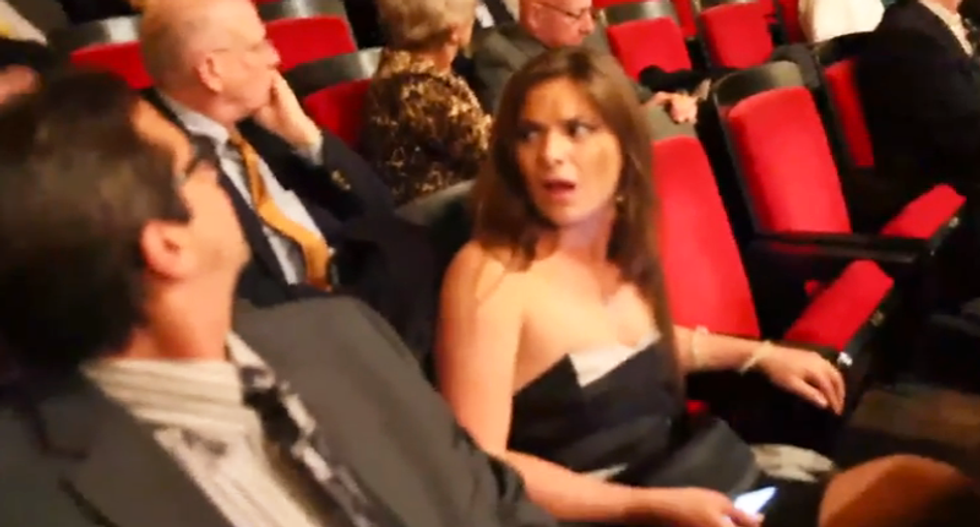 Attendees at Saturday night's performance of the St. Louis Symphony were treated to an addition to the evening's scheduled  program when a flash mob of protestors serenaded the audience with a civil rights song dedicated to slain Ferguson teen Michael Brown.

According to the St. Louis Dispatch, as the symphony musicians and chorus prepared to perform Johannes Brahms' Requiem following intermission, two audience members stood up and began singing "Which Side Are You On?" to the stunned attendees.

Fellow protestors stood up throughout Powell Symphony Hall and joined in the song as banners were unfurled from the balconies reading: "Racism live here," and "Requiem for Michael Brown 1996-2014."

To drive home the point of their protest, the singers added "justice for Mike Brown is justice for us all" into civil rights classic.

Following the impromptu performance, paper hearts inscribed with "Requiem for Michael Brown, May 20, 1996 - August 9 2014" were dropped onto the crowd below.

As the protestors exited the theater they chanted “Black lives matter.”

According to St. Louis Symphony Orchestra publicist Erika Ebsworth-Goold, the protesters were paying members of the audience and left the building peacefully.

Following the protest, the symphony continued on with the evening's performance.

Saturday represented the tw0 month anniversary of the death of Michael Brown, shot down in the street of Ferguson by police officer Darren Wilson.

Watch the video below uploaded to YouTube by St. Louis American:

Australia on Friday shrugged off Chinese anger over its decision to acquire US nuclear-powered submarines, while vowing to defend the rule of law in airspace and waters where Beijing has staked hotly contested claims.

An ace US fighter pilot and one of the last surviving members of the swashbuckling "Flying Tigers" who fought the Japanese for Nationalist China during World War Two has died at 103, friends and colleagues announced Thursday.

The Flying Tigers operated out of Burma in the early 1940s in support of Kuomintang leader Chiang Kai-shek against the Japanese, conducting dangerous missions over occupied China and shooting down hundreds of enemy bombers.