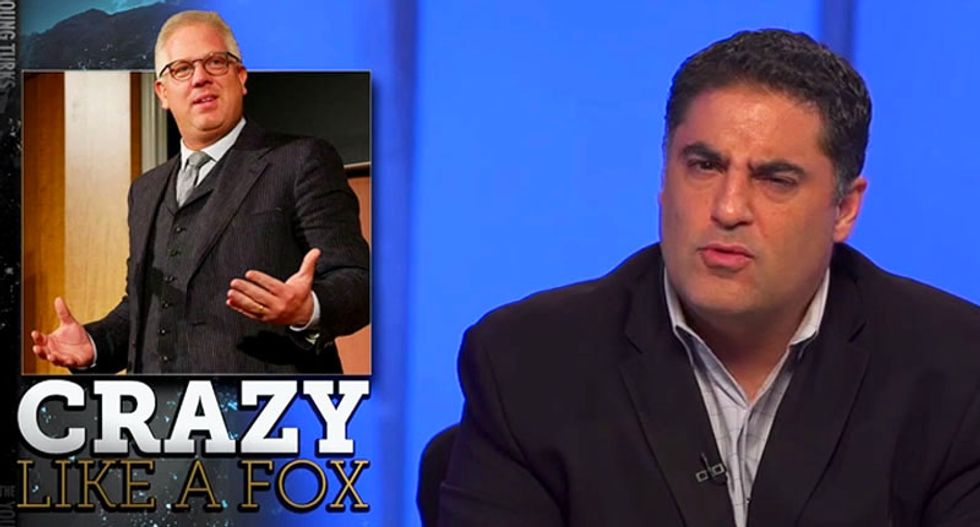 Young Turks host Cenk Uygur took up the delicate subject of Glenn Beck's health -- in particular his claim to have have been cured of a mysterious illness by a “chiropractic neurologist,” -- and offered his own diagnosis: "I'm not buying it."

Working off of information reported by The Raw Story, Uygur expressed skepticism that whatever ailed Beck was cured by being placed in a gyroscope and spun, combined with "an intense regimen of spiritual work and fervent prayer."

Beck recently broadcast a special message to his audience, saying his unidentified ailment had been coming on over the course of the last few years, causing him to lose his memory, suffer seizures, feel intense pain in his hands and feet, and suffer from fits of vocal paralysis.

Beck expressed his belief that his illness was responsible for emotional outbursts that “quite honestly has made me look crazy.”

"Glenn Beck recently came out on his own show and pretty much admitted that he was crazy," Uygur began. "I thought I'd been saying that for awhile. Now, yes, I'm supposed to feel a little bad because he says he has illness issues, and being the progressive that I am, I do feel a little bad," he added before introducing a clip of Beck's admission of his rare neurological condition, detailing the battery of tests "the best doctors in the world" put him through.

Calling some of Beck's assertion "questionable," Uygur noted that, for Beck's audience, "It can't be too heartening to know that you were following a guy who tested in the bottom 10 percent of mental faculties, by his own admission. A guy who had to be tested for his IQ. A guy who thinks he might be crazy."

While conceding that what Beck was experiencing sounded like panic disorder, Uygur went a step further suggesting that Beck was hyping up his illness for attention because his media empire is starting to collapse.

Saying Beck has realized that people no longer pay attention to him when he says "crazy conservative things," Uygur said that Beck now has to "go over the top."

Uygur said Beck is changing his tune, "partly to get attention, but mainly he's got to get another TV contract. If he doesn't he's gonna go bankrupt."

"So he's out there now saying 'no no no no, you were right I was crazy back then, you're right, I know. But I spun around and around. I'm totally fine now. Totally fine. Please, please, let me back on TV.' "

Watch the video below uploaded to YouTube by The Young Turks: