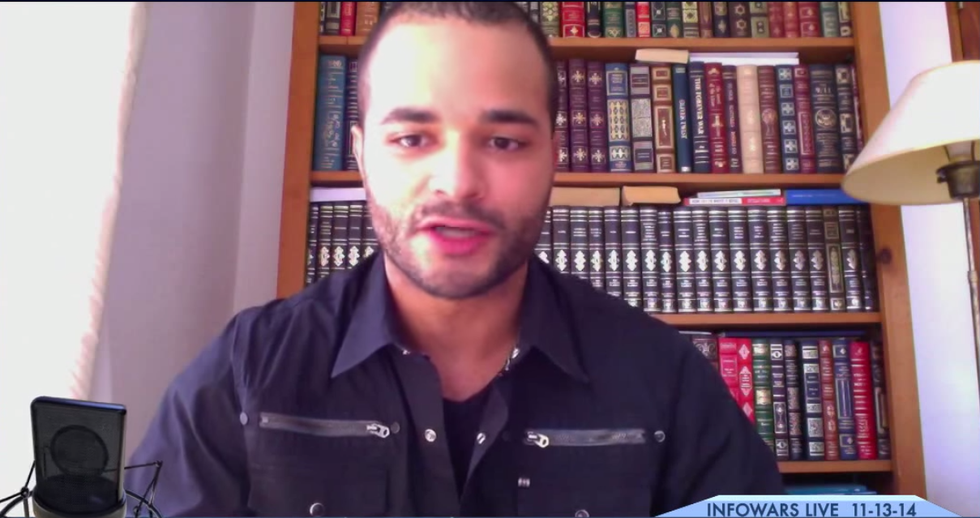 Jones began the segment by lamenting that "Hollywood" and the entertainment industry are largely controlled by "the Left."

However, "we are starting to see more positive messages coming out of Hollywood," said Jones, "and I've talked to some of the directors and people like Mark Cuban who understand that we have a tyranny on our hands."

This week, rapper Nicki Minaj released an animated short called a lyric video to promote her single, "Only." A lyric video is a quick, cheaply produced video released online as a placeholder for an official video, which will be released within a matter of weeks.

The clip's director, Jeff Osborne, released a statement taking full responsibility for the use of Nazi-derived imagery, but protested that he is in no way advocating Nazism and is not an anti-Semite.

Jones welcomed Osborne to his show via phone, saying that the video is "obviously" not an endorsement of Nazism, but that it shows "the culture that we've become."

Osborne said he doesn't really know what all the fuss is about "because this type of imagery is all over the place."

"The point of the video was actually quite the opposite," he continued, "to show how totalitarianism is very much alive today, it exists, I mean, right in front of our eyes and a lot of people can't see that. I think a lot of people are just missing the point."

Jones suggested that the reason people found the video objectionable is "because this is the type of culture that we are devolving into, militaristic, regimented, highly controlled."

The fact that so many people called for the video to be taken down, Jones said, "just proves the fascism."

Osborne said that he made the video scary because people should be scared "of what our future holds based on the way people in the media react to this and other things."

Jones said that he thinks that part of the issue is that the New World Order really does not want fans of hip hop culture to become politically aware.

"Hip hop dominates the world now, and if it ever gets really awake, that's it for the New World Order and their big weapon may backfire," said Jones.

At the end of the segment, Osborne thanked Jones for having him, saying that he's a regular listener and "I actually think it's pretty surreal that I'm on the show right now speaking to you because...aw, man, you are my hero, seriously."

Watch the interview, embedded below via Alex Jones TV: