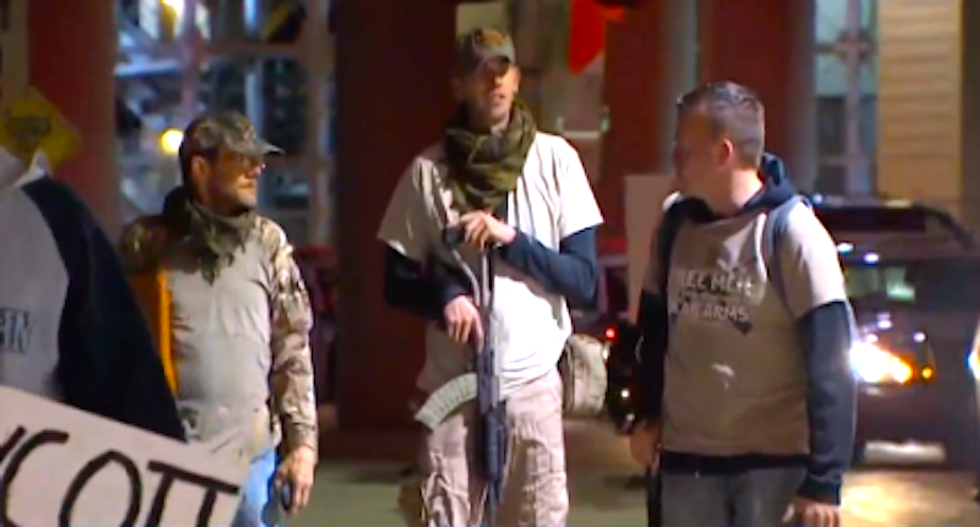 Three members of a Texas open carry group carried rifles over their shoulders as they trailed a small group of Ferguson protesters Wednesday night in Dallas.

About two-dozen demonstrators chanted, “no justice, no peace,” as they marched several blocks into downtown from police headquarters.

They were followed by members of Come and Take It Texas, an open-carry group that has previously made national news by complaining they were being “trolled by skanky topless libtards” during their monthly gun rights demonstrations.

The open-carry advocates insisted they respected the rights of the group protesting the decision by a Missouri grand jury not to indict Officer Darren Wilson in the fatal shooting of 18-year-old Michael Brown.

The two groups occasionally spoke cordially during the march as a dozen police cars followed their route.

No arrests were made Wednesday in the Dallas area in connection with the demonstrations.

Seven protesters were arrested Tuesday night as they blocked lanes on Interstate 35 as part of similar demonstrations nationwide.

Texas allows the open carry of most rifles, but not handguns.

Gov.-elect Greg Abbott has said he would sign legislation to allow for the open carry of handguns.