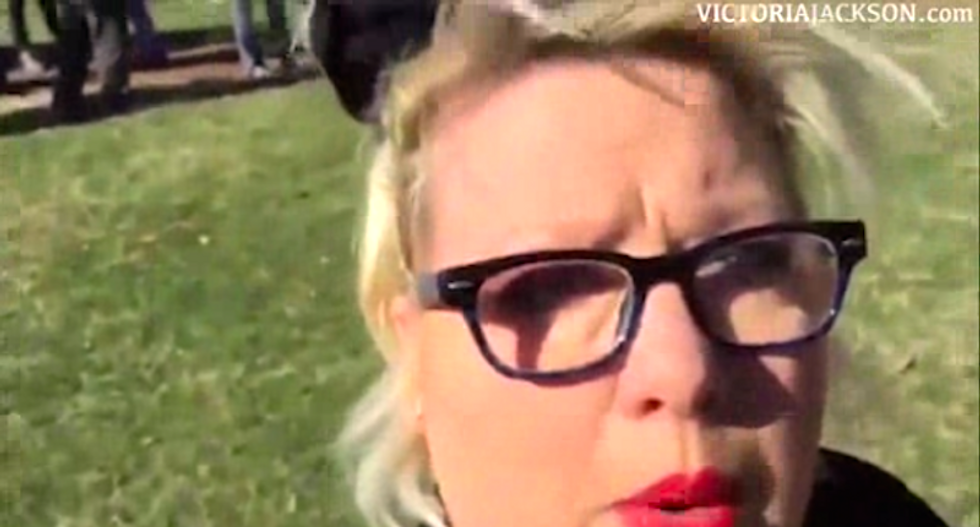 Former “Saturday Night Live” performer Victoria Jackson showed up at Vanderbilt University over the weekend to support a professor who published an anti-Islam newspaper column and sparked a student protest.

Carol Swain, a longtime political science and law professor at the Nashville university, argued in the piece last week that the "Charlie Hebdo attacks prove critics were right about Islam," and students gathered near the campus library to demand an official condemnation of her statements from Vanderbilt administrators.

“This protest is about the fact that a member of Vanderbilt's faculty attacked her own students, that a member of the faculty published hate speech against the very young adults that she seeks to inspire,” said Farishtay Yamin, who organized the rally.

Jackson, who unsuccessfully ran on an anti-Muslim platform for Williamson County Commission, said she was deeply suspicious of the rally, its organizers, and its purpose.

The rally took place one day after Swain’s column ran in the print edition of The Tennessean and two days after it was published online.

But Jackson wondered whether it was only a coincidence that the protest occurred on the same day as the pro-Islam “Stand with the Prophet” fundraiser in Garland, Texas, that was heavily covered by conservative media.

The Tea Party activist also claims the Vanderbilt event was organized by the “liberal student” Yamin, who is the publicity chairwoman of the university’s Muslim Student Association, with the help of the Muslim Brotherhood.

She claims a woman wearing a headscarf followed her around and told other students not to speak with the former comic actress.

Jackson also expressed surprise that both speakers at the event, which was organized to protest Swain’s published writings about Islam, spoke out against the professor and that no one was invited to defend her.

“That’s when I approached the microphone politely and asked the grownups nearby if I could speak,” Jackson said. “I’m Carol’s friend and a fellow conservative who is concerned about the safety of America. The grownups scuttled about nervously and quickly turned the microphone off.”

Jackson said she stood before a crowd of 200 to 300 people holding a finger sign reading “Ban Sharia,” which appeared to be finger-painted, and she said their response suggested that maybe Sharia law has already been instituted in the United States – at least on this college campus.

“’What is the Law of the Land?’ is the issue,” Jackson said. “If it’s Sharia, than (sic) I am not allowed to criticize Islam or Mohammed. If it is The Constitution, I have Freedom of Speech. Which is it? Because, right now, and especially in front of this liberal, politically correct, and Muslim Brotherhood/terrorist crowd, I feel like we’re living under Sharia.”

Jackson said her “Tea Party friend,” Matt, was supposed to record the incident with her cell phone but neglected to push the button to do so, but she said local media and other participants captured video of her one-woman protest.

“I began shouting, ‘Freedom of Speech,’ like 20 times, and the Muslim Brotherhood handlers went around telling the crowd to turn their backs on me,” Jackson said. “They obeyed like sheep to a sheep herder. I stopped shouting. The crowd broke up. Several reporters and cameras surrounded me, (and) Matt started softly playing songs about Jesus on his guitar.”

Jackson, who repeated the thoroughly debunked claims about Muslim “no-go zones” in Europe and Dearborn, Michigan, said her experience at the rally was chilling.

“It’s very interesting that the crowd turned their backs on a sign that said BAN SHARIA – that means they are FOR SHARIA. Uh oh,” she said.

She then ran into her Muslim neighbor, who she feuded with online after she called him a “civilization jihad,” and repeatedly demanded that he say whether he supports the Constitution or Sharia law.

He finally told her he supported the Constitution, which she dismissed as a Koran-sanctioned lie.

“He then invited me to dinner at his home and said, ‘You know where I live,’ which was creepy because how would I know that?!” Jackson said. “I said, ‘If we can have a debate and film it.’ He didn’t respond.”

Watch Jackson debate a student on politics and religion at the protest in video posted online by VictoriaJackson.com: