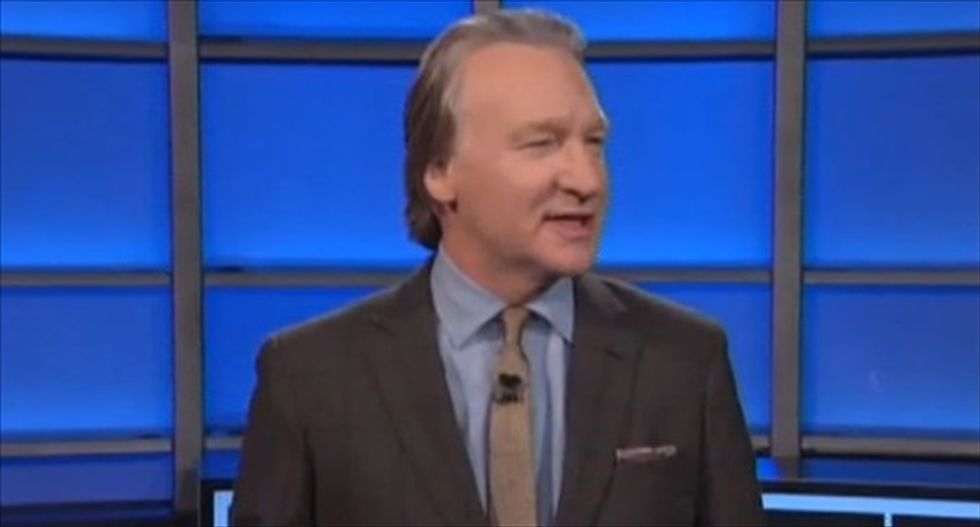 "He's got a blind, banging, star-spangled boner for this country," Maher said of Giuliani. "He leaves notes on America's car. He calls America's voicemail just to hear its voice. If America were a woman, he'd move her into the mayor's mansion while he was still married to his wife."

Giuliani has been on the defensive since questioning President Barack Obama's patriotism earlier this week, saying, "I do not believe that the president loves America. He doesn't love you. And he doesn't love me."

What the remarks showed, Maher said, was Giuliani's longing for "the love of a strong black man," arguing that the former mayor expressed more vividly in his own book, Fifty Shades of Black.

"Apparently he really craves Obama's love, in the rough kind of way," Maher explained, before reading from a scene in which Obama berates Giuliani inside the White House.

"'What do you want?' [Obama] demanded. His eyes were cold and unknowable -- like the donor list of a GOP super PAC," Maher read. "'I have some ideas about combatting violent extremism,' [Giuliani] stammered. 'Shut up!' Obama snarled. 'If I wanted to hear you talk I'd buy a ticket to one of your bogus motivational seminars, you miserable hack.'"

Obama's insult, Maher said, stung Giuliani "like a whip across his withered buttock."

When the Giuliani character protested, telling Obama "you don't love me," the president responded by pulling out his "long hard black veto pen" and promising to "use it over and over."

Watch Maher's monologue, as posted online on Friday, below.