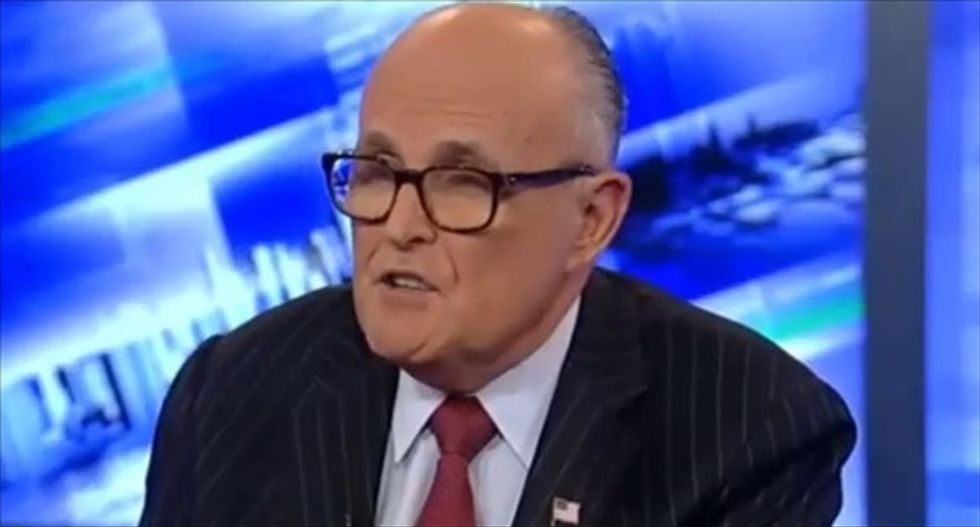 Later in the interview, Giuliani attacked Obama's grandfather for "introducing him to Frank Marshall Davis, who was a Commmunist."

"You can fight in World War II, and then you introduce someone to a communist," Giuliani insisted.

"It's a political worldview," Kelly countered. "It's not a hatred for the country."

The former mayor and Republican presidential candidate has faced criticism of his own after his remarks at a dinner honoring Wisconsin Gov. Scott Walker (R) on Wednesday.

Besides being ripped by liberal commentators, Giuliani was slammed by journalist and author Wayne Barrett in a column for the New York Daily News.

Barrett, who wrote a biography of Giuliani, called the mayor's remarks about Obama's parenting "a bow no doubt to the parenting prowess of Harold Giuliani, who did time in Sing Sing for holding up a Harlem milkman and was the bat-wielding enforcer for the loan-sharking operation run out of a Brooklyn bar owned by Rudy's uncle."

Harold Giuliani and five of his brothers, Barrett wrote, avoided serving in World War II, much like the ex-mayor received five deferments to avoid serving in Vietnam.

Barrett opened the piece by sarcastically observing that Giuliani "knows a lot about love."

"Ask Judi Nathan, his third wife, whom he started dating while still married to Hanover and New York mayor," he wrote. "In two SUVs, he and an entourage of six or seven cops traveled 11 times to Judi's Hamptons getaway at a taxpayer cost of $3,000 a trip. That's love."

Kelly's interview with Giuliani, as posted online on Thursday, can be seen below.

In a piece published this Friday, Vanity Fair takes a deep dive in the relationship between Kellyanne Conway and George Conway: one a former adviser to Donald Trump during his time in the White House and one of his most vocal defenders to the media, and the other a conservative lawyer who became one of Trump's fiercest critics.

According to Vanity Fair's Evgenia Peretz, while Kellyanne Conway's instincts are still to protect her former boss, her relationship with Trump is more complicated than some might think.

"The View" panelists ganged up on Rep. Marjorie Taylor Greene after she mocked a colleague's transgender child.

The newly elected Georgia Republican placed a transphobic sign -- "There are TWO genders: Male & Female. Trust The Science!" -- outside the Capitol office door of Rep. Marie Newman (D-IL), whose daughter is transgender, as part of an ongoing dispute over the Equality Act granting stronger LBGTQ protections.

During his speech at the Conservative Political Action Conference (CPAC) this Friday, Sen. Ted Cruz (R-TX) touched on a variety of topics, from poking fun at himself over his widely panned Cancun trip, to the "new galactic empire," otherwise known as the media, that will "rule for a thousand years," to the alleged religious freedom-killing mandates that disallowed in-person church services during the coronavirus pandemic.

Several commenters on Twitter accused the senator of embarrassing himself with his over-the-top performance.