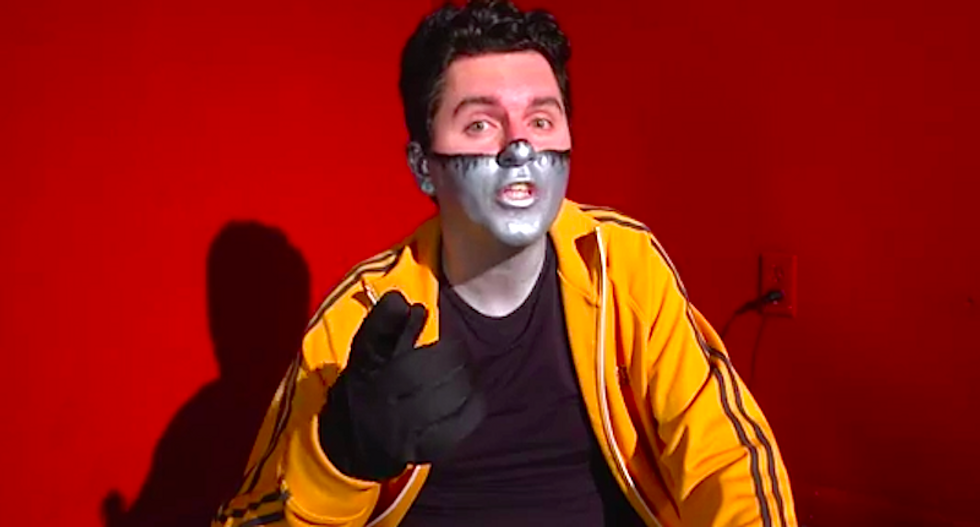 If you fall deep enough down a YouTube rabbit hole chasing after a conspiracy theory, eventually you’ll run across videos “proving” that many world leaders and celebrities are actually shape-shifting alien reptiles.

These videos offer as proof fleeting changes in appearance of various actresses, news anchors, or government officials, and the frequently low-quality video clips are annotated with alarmist captions and credulous voice-overs.

“When I see a weird video glitch, it makes me think of how much I hate the unreliable quality of most streaming video services, with their pauses and wild fluctuations in resolution,” says Captain Disillusion, portrayed by filmmaker Alan Melikdjanian. “But some people, when they see a video glitch, it makes them think of aliens – aliens hiding among us.”

The idea has long been a staple of science fiction, but the British conspiracy theorist David Icke has published numerous books and articles claiming the world is secretly run by the shape-shifting alien reptiles that live in the hollowed-out moon.

He’s promoted that and other conspiracy theories on the Infowars radio program, although host Alex Jones does not seem to take seriously his claims about reptilian overlords from the Fourth Dimension.

Icke and other YouTube conspiracy theorists believe the video glitches are “wardrobe malfunctions” that betray the aliens’ costume, holographic façade, or shape-shifting abilities – which they use interchangeably to describe what’s happening.

“The point is, there’s a conspiracy, and you can’t see it because your eyes aren’t open,” Melikdjanian jokes. “You have to be like me and attuned like me to notice these things every time they happen to a world-famous person on international TV. Please visit my website, WakeUpSheeple-dot-ugh.”

Melikdjanian explains there are basically two methods developed by “godless scientists” to shrink video files so they can be streamed over the Internet.

The first method, intraframe compression, breaks down individual frames that run much more smoothly and is typically used by professionals, Melikdjanian says.

He explains that the second method, interframe compression, breaks only some frames down to smaller size and fills the rest of the video with predicted “guesses” of would happen between each intra-recorded frame.

“Normally this works OK and cuts down on file size, but sometimes if I-frames are really far apart and one of them gets skipped in a badly copied file or livestream … (the predicted frames) keep distorting the picture way beyond what’s acceptable,” Melikdjanian says. “They’re working from too old a reference.”

He said some Internet users have “embraced the glitch” and create “super trippy” videos – which are called glitch-hacking, datamoshing, or pixel-f*cking.

Those effects are becoming increasingly mainstream, showing up in a Kanye West video, for example, and Melikdjanian hopes those forms gain even wider acceptance.

“Maybe, just maybe, if the effect keeps being popularized through creative work, maybe – just maybe – there’ll be no one left to take the conspiracy mongers seriously,” he says.