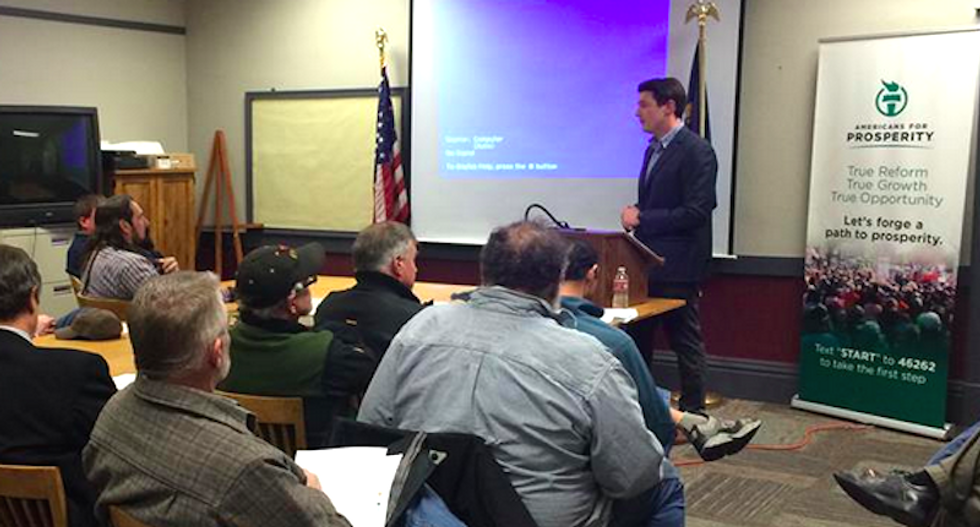 Zach Lahn, state director of Americans for Prosperity-Montana, speaks at a town hall in Dillon (Facebook)

Dozens of voters shouted down paid staffers from a Koch brothers advocacy group that targeted a Montana Republican lawmaker who is open to expanding Medicaid in his state.

State Rep. Frank Garner has refused to sign a blanket pledge against expanding Medicaid under the Affordable Care Act, and Americans for Prosperity-Montana is campaigning against him and two other lawmakers -- state Reps. Jeff Welborn and Tom Berry -- who have done the same.

The Koch-sponsored group is blanketing their House districts with mailers that show each lawmaker’s face superimposed over a photograph of President Barack Obama.

About 100 people turned out for a town hall meeting Thursday in Kalispell that was promoted by AFP, and Garner traveled eight hours from Helena to speak with his constituents after a reporter told him about the event, reported the Flathead Beacon.

“I support their right to have an opinion. I just didn’t like how they did it,” Garner said. “They didn’t even extend the courtesy of telling me about the meeting. What does that say about their intentions?”

However, some GOP lawmakers, including Garner, have refused to dismiss the proposal outright and remain open to some type of expansion of health care coverage.

Garner, the former police chief in Kalispell, said he understands his constituents better than an out-of-state group.

Voters frequently interrupted the AFP presentation with laughter, booing, and other jeers from Garner’s supporters.

“You have pissed me off,” one voter said. “Character assassination does not go down well in Montana. If he has to take a pledge then I want it to be the Pledge of Allegiance, because they don’t represent you, they represent me.”

Another voter challenged AFP’s activists to explain what they were up to and harshly rebuked their bosses.

AFP-Montana’s state director, Zach Lahn, insisted the meeting was intended to send a message to lawmakers about what he described as a bad policy – but Garner dismissed the claim as absurd.

“If the purpose is to make sure legislators know, then why am I the only one here? And why didn’t I get an invite?” Garner said as voters cheered.

“I promised the people here when I ran that I would listen to you and not out-of-town special interests,” Garner said to wild applause. “If every time they want me to sign a pledge card and I don’t do it they are going to rent a room and have a meeting, then this is going to get real expensive -- because I’m not signing the pledge card.”