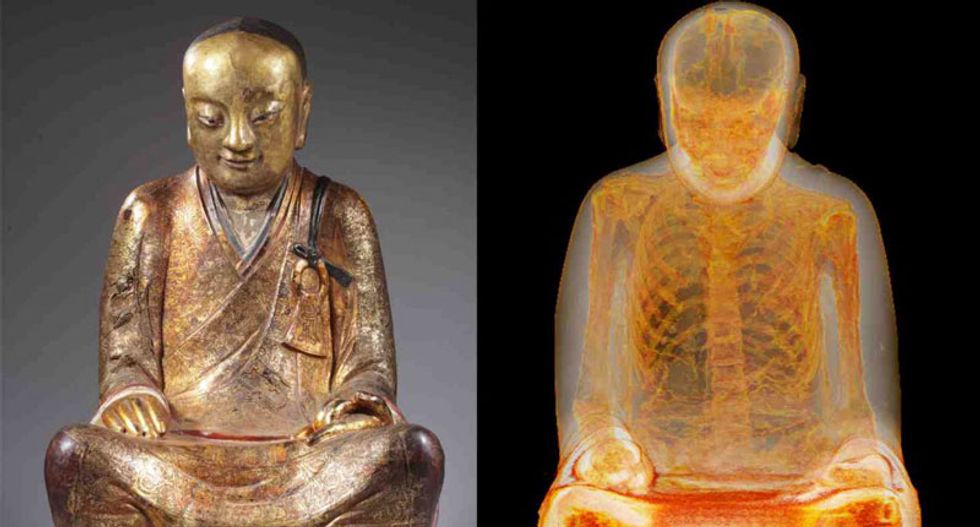 Using CT scanning technology and using an endoscope, researchers at Meander Medical Center in the Netherlands have been able to identify the body of a Buddhist monk encased inside of a 1,000-year-old Buddha statue, according to Colossal.

Officials from the Netherland's Drents Museum -- who are loaning the statue to the National Museum of Natural History in Budapest for an exhibition -- delivered the statue to the medical center in an effort to learn more about the body they already knew was encased in the reliquary.

According to Erik Bruijn, an expert in the field of Buddhist art and culture and guest curator at the World Museum in Rotterdam, the body is that of a Buddhist master known as Liuquan, associated with the Chinese Meditation School

Using a specially designed endoscope, hospital surgeon Dr. Reinoud Vermeijden was able to extract samples from the thoracic and abdominal cavities of Liquan, inside the statue.

In a space where there had once been organs, Vermeijden retrieved paper scraps printed with ancient Chinese characters, as well as bone material for DNA testing. Using the CT scanner, doctors were able to take photos showing how the mummy looks inside the statue.

The Buddha statue has been part of a mummies exhibition at Drents, with artifacts dating back to the 11th and 12th centuries.

Uncropped photos from the Drents Museum of the statue and CT scan below: