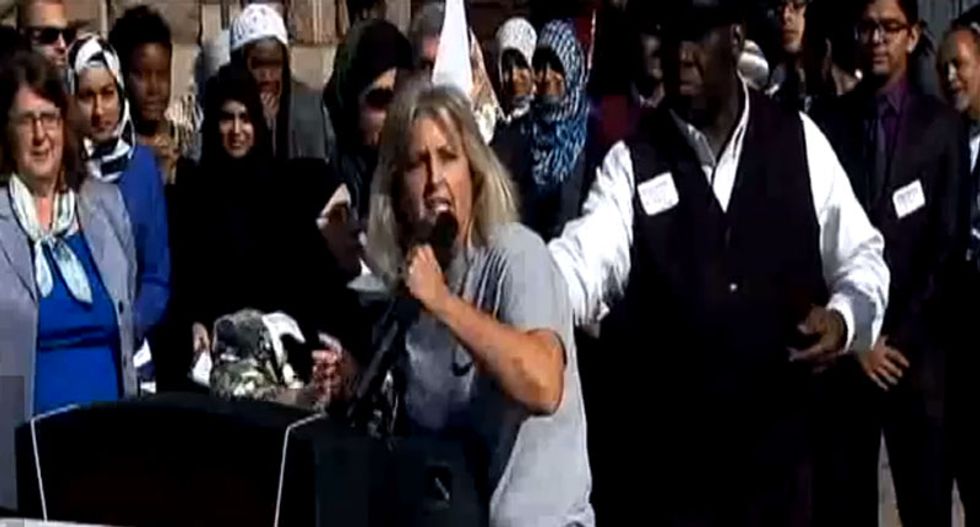 A Michigan woman with a history of protesting at public Muslim events around the country, and who gained Internet fame for explaining that Monster Energy drinks are the "work of Satan," struck again on Friday at an event in Oklahoma.

Muslims, who gathered at the state capitol building in Oklahoma to meet with lawmakers, had their planned afternoon prayer interrupted by protester Christine Weick, 50, reports KFOR.

As the prayer began, Weick shouted “…lead us not into temptation, but deliver us from evil. For thine is the Kingdom, the power, and the glory. For ever and ever. Amen. That is our message,” before capitol security could escort her out.

This is not the first time Weick has interrupted a Muslim event.

In November of last year, she disrupted the first ever Muslim prayer event at the National Cathedral, shouting, “Jesus Christ died on that cross. He is the reason we are to worship only Him. Jesus Christ is our Lord and Savior. We have built …allowed you your mosques in this country. Why don’t you worship in your mosques and leave our churches alone? We are a country founded on Christian principles.”

In an interview with WND, Weick said that she felt God and the Drudge Report drew her to the Washington event.

Weick also explained that she lives in her car in Tennessee after being disowned by her family because she took a stand against same-sex marriage and other “moral issues.”

On January 29, Weick made an appearance at the Texas Muslim Capitol Day celebration in Austin, grabbing a microphone from a speaker and addressing the crowd.

"I proclaim in the name of the lord Jesus Christ over the capitol of Texas: I stand against Islam! And the false prophet Muhammad!" she exclaimed. " Islam will never dominate the United States, and by the grace of God, it will not dominate Texas."

Before Weick began her protests at Muslim events, she became famous on the Internet for a much-mocked interview she gave, saying Monster energy drinks were satanic.

In the video, Weick explained that the Monster 'M' logo stands for the Hebrew letter vav — the sixth letter in the Hebrew alphabet — which she maintains stands for 666, the Sign of the Beast.

Watch the Oklahoma protest video below, uploaded by Oklahoma Watch:

The Texas protest, uploaded by My Fox Austin: