Jay Smooth on super-awkward MSNBC interview: 'That was the longest 30 seconds of my life' 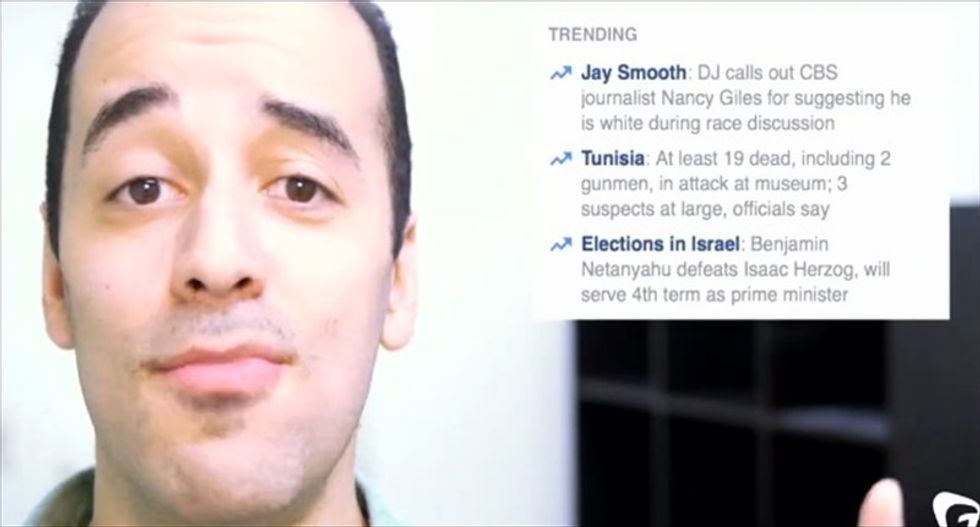 Hip-hop activist and cultural commentator Jay Smooth addressed the fallout from his latest brush with Internet fame in a video for Fusion on Monday, saying he needed some "racial me-time" after becoming a trending topic.

"I gotta say, I'm glad that you all thought that was so hilarious, because for me that was the longest 30 seconds of my life," he said.

Smooth showed footage of his appearance on MSNBC's All In last week opposite CBS Sunday Morning's Nancy Giles, when he had to explain to her that he was black.

"It was like I could see where we were going from a mile away and it just kept on playing out in slow motion like a horror movie," he explained. "Inside my mind I was yelling, 'No, don't go in the house,' and I tried to give her an out by saying, 'Hey, I'm a rap guy,' but she just kept on going."

However, he quickly added that he had no ill will toward Giles.

"First of all, the media makes more than enough money off the spectacle of black people in conflict," Smooth said. "I'm not trying to contribute to that. I know she had no malicious intent."

Secondly, he said, the nature of cable news appearances -- which asks guests to balance stagecraft and entertainment value while delivering a well-thought-out take on developing topics -- make it hard for any guest to do their best.

"These cable news panels -- even moreso than a 30-second coffee transaction -- are just not natural spaces for deep conversation," Smooth said. "I always come away from them with about 10 things I wish I said differently, and I've got to cut somebody else a little slack if they get sloppy with me."

Giles and Smooth were invited by host Chris Hayes to discuss Starbucks' plan to turn "coffee transactions" into discussions on race. The #RaceTogether campaign, as it was called, was canceled on Sunday amid widespread skepticism.

Smooth himself expressed some misgivings about the initiative, saying that billion-dollar corporations had more to offer to the pursuit of racial justice than "conversations."

Watch Smooth's commentary, as posted by Fusion on Monday, below.