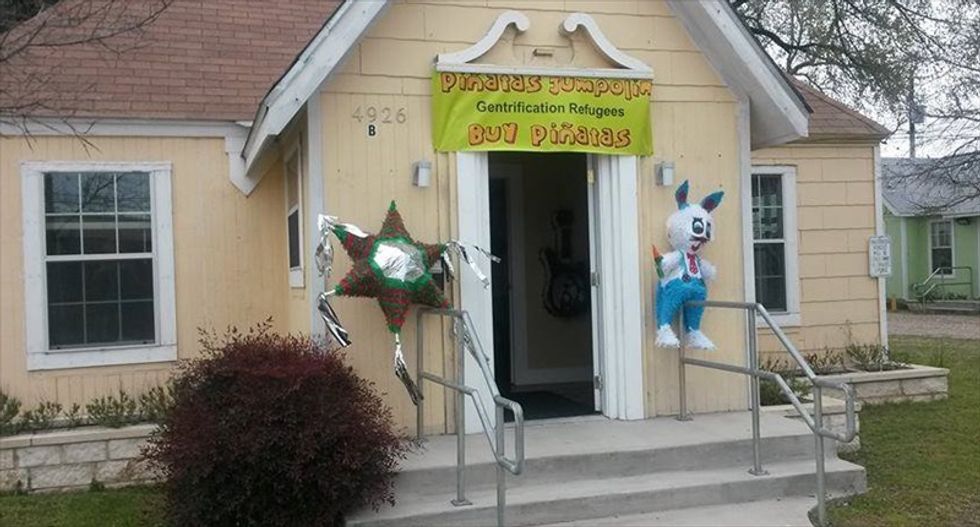 A Texas couple's piñata store was demolished in order to provide parking spaces for a tech industry event, prompting an online boycott and a push for new legislation, Latina magazine reported.

The March 14 party, timed to coincide with the annual South by Southwest festival (SXSW), was scheduled to be held in a building adjacent to the site of Sergio and Monica Lejarazu's business, Jumpolin. F&F Real Estate Ventures, which owns the property, obtained a permit to demolish it in January, but reportedly did not inform the couple of their intentions. Instead, Jumpolin was torn down last month with inventory and cash registers still inside.

One of F&F's owners, Jordan French, then questioned the couple's character in an interview with Austin Culture Map.

"Probably their livelihood was selling helium and stolen bicycles," French said. "They weren't making a living selling piñatas; they were selling something else. I don't want to speculate what that is."

Records indicate that French's company first applied for the demolition permit within a month of buying the property last October and becoming the couple's landlords. F&F has accused the Lejarazus of refusing to pay their rent, a claim they have denied. According to Latina, the owners planned to tear the building down in order to provide parking spaces for a party sponsored by an event planning company, Splash, Inc.

Sergio Lejarazu posted a video online of himself paying the rent for February. The couple's lawyer, Doran Peters, also reportedly contacted F&F asking for confirmation that it received the payment, but the company did not respond before Jumpolin was razed.

"Say you have a house that was infested by roaches," French said of the demolition. "You have to clean that up."

French subsequently released a statement regretting what he called the "unfortunate outcome," but did not address his accusation that they were selling stolen merchandise.

According to the Austin Chronicle, city officials did not verify whether the building was occupied before approving F&F's demolition permit.

"Making sure if someone is living in a building or has property stored in the building seems to me much more between the owner of the building and the tenant," Historic Preservation Officer Steve Sadowsky said. "And that's not the city's concern."

Splash reversed course after being contacted by members of an online campaign supporting the Lejarazus. It also reportedly "severed ties" with F&F and held the event at another location.

"We had no idea that this was the plan and would certainly never have gotten involved in this venue at all if we had," Splash CEO CEO Ben Hindman said.

The Chronicle also reported that the couple's lawsuit against both French's company and the contractors who demolished their store will begin on July 20.

Meanwhile, state Rep. Eddie Rodriguez (D), who represents the east Austin neighborhood where the store was located, has introduced a bill that would ban landlords from demolishing property without informing tenants.

"The details have yet to come out, but what remains clear is it was unjust and something that really wasn't fair to the tenant," he told the Chronicle. "I believe it was clearly done because the owner of the property wanted to maximize the money they could make on the property."