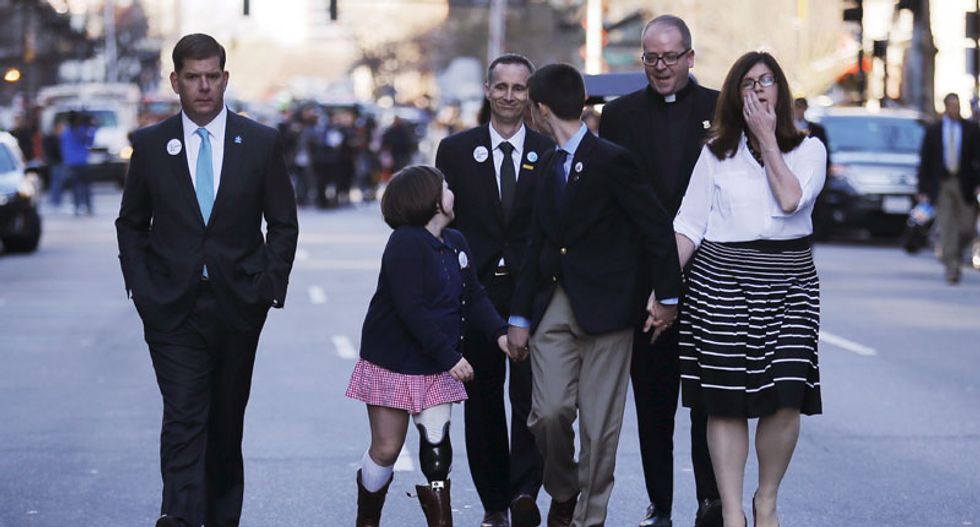 The family of Boston Marathon bombing victim Martin Richard (R) and Boston Mayor Marty Walsh (L) walk along Boylston Street following a ceremony at the site of the second bomb blast on the second anniversary of the bombings in Boston, Massachusetts April 15, 2015. REUTERS/Brian Snyder

The parents of the boy who was the youngest to die in the attack on the Boston Marathon asked federal prosecutors to abandon their effort to sentence the bomber to death, in a statement on the front page of the Boston Globe on Friday.

Bill and Denise Martin, parents of 8-year-old Martin Richard, instead urged the U.S. Department of Justice to seek a deal in which Dzhokhar Tsarnaev, who was convicted last week of the 2013 attack, would waive his appeal rights in exchange for a sentence of life in prison without the possibility of parole.

"We know that the government has its reasons for seeking the death penalty, but the continued pursuit of that punishment could bring years of appeals and prolong reliving the most painful day of our lives," the couple wrote in a statement titled "To end the anguish, drop the death penalty."

The second phase of Tsarnaev's trial is due to begin Tuesday, when the jury that convicted the ethnic Chechen will decide whether to sentence him to death or life in prison.

Prosecutors argue Tsarnaev, 19 years old at the time of the bombing, deserves execution, saying his attack was aimed at punishing the country he moved to a decade before the bombing, an act that he described as taking revenge for U.S. military campaigns in Muslim-dominated countries.

Defense attorneys counter that Tsarnaev was not driven by personal ideology but followed the lead of his older brother, 26-year-old Tamerlan Tsarnaev. Tamerlan died following a gunfight with police four days after the April 15, 2013 attack.

Carmen Ortiz, the U.S. attorney for Massachusetts, said that she is aware of the Richards' views and added that she could not specifically comment on the question of whether a deal could be reached with Tsarnaev's attorneys.

"I care deeply about their views and the views of the other victims and survivors," Ortiz said. "As the case moves forward we will continue to do all we can to protect and vindicate those injured and those who have passed away."

William Richard provided some of the most emotionally powerful testimony during Tsarnaev's trial. He described going to the marathon with his three young children and being hurled through the air when one of the two homemade bombs went off.

A composed Richard recounted seeing his two youngest children, Martin and Jane, both grievously injured by the bombing and realizing that he had to triage his own family.

"I knew in my head that I needed to act quickly or we might not only lose Martin, we might lose Jane too," he testified.

Jane lost a leg but survived.