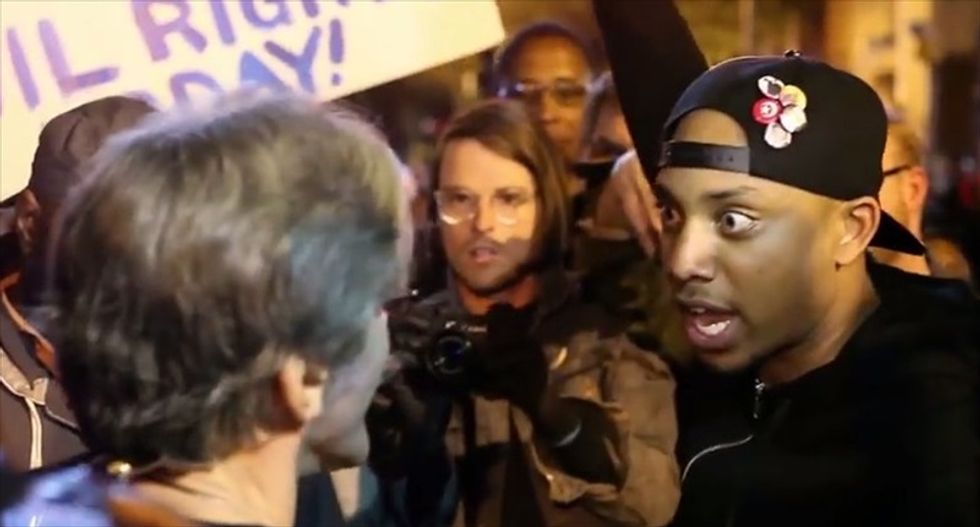 New footage reveals more context to the confrontation between Fox News' Geraldo Rivera and a Baltimore demonstrator Rivera dismissed as a "vandal" on the air on Tuesday, Media Matters reported.

"I want you and Fox News to get out of Baltimore City," the unidentified man tells Rivera. "You are not here reporting about the boarded up homes and the homeless people under MLK [Boulevard]. You're not reporting about the poverty levels up and down North Avenue."

The man then accused Rivera of ignoring the city when the 300 Men March activist group marched peacefully down the same avenue.

"But you're here for the black riots that happen," he continued. "You're not here for the death of Freddie Gray."

The man then called on people filming them to stop recording the conversation.

"This is not for YouTube," he said, adding, "I want the white media out of Baltimore City until you're here to report the real story."

According to Media Matters, the footage was taken before Rivera criticized demonstrators on Tuesday night in the moments leading up to the one-week 10 p.m. curfew around the city.

Rivera can be seen smiling and trying to evade the protester throughout the encounter. But while he did not address the man off-camera, Rivera told him, "You're making a fool of yourself" once he was on the air. Rivera also called the crowd "vandals" during an interview with Maryland state Senate Majority Leader Catherine E. Pugh.

"It seems like they want trouble," Rivera said of the demonstrators.

"They don't want trouble," Pugh countered, before accusing the media of trying to "incite" protesters.

Watch the confrontation, as posted online on Wednesday, below.