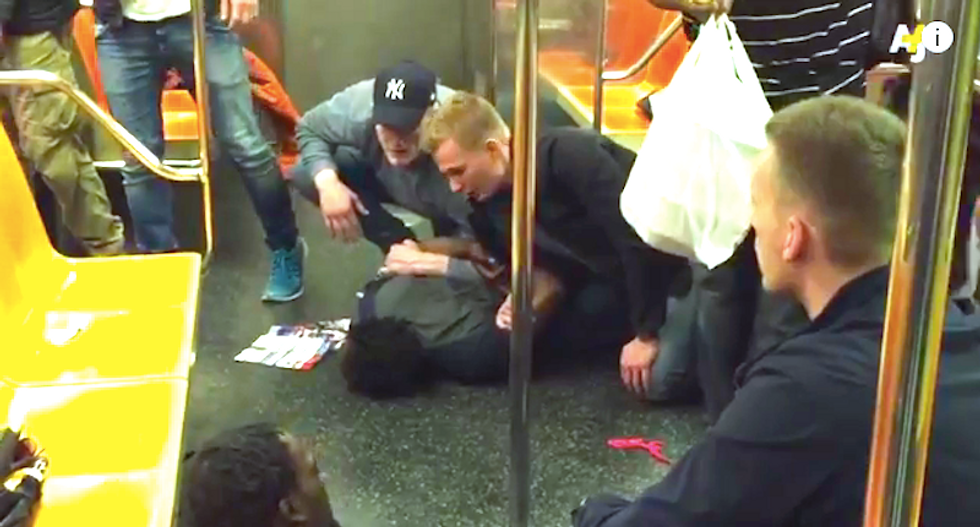 The officers -- Samuel Kvarzell, Markus Asberg, Eric Jansberger and Erik Naslund — were riding an uptown No. 6 train Wednesday on their way to see “Les Miserables” when they responded to the subway driver’s call for help, reported the New York Post.

The video shows one of the brawlers sitting calmly on the floor, flanked by two of the Swedish police officers, while two others kneel on the other man – who is more unruly – to hold him face-down on the floor.

“How do you feel?” one of the officers asks the seated man, who says he feels fine.

The other man struggles, but the pair of officers calmly keep him pinned to the floor.

“I can’t breathe,” he screams, as he rises occasionally from the floor but is unable to escape.

“Take it easy,” one officer repeatedly tells him. “Sir, calm down, OK? Everything is going to be OK.”

The man eventually calms down, and he admits to the officers that he’s not injured after they ask.

The Swedish officers held the men until New York City police could board the train and take them into custody.

“We came just to make sure no one got hurt,” Asberg said. “We were trying to stop the fight.”

Of course, not every police interaction ends with a suspect's death or injury -- but social media users pointed out the difference between the way the Swedish officers behaved and recent tragic cases involving American police.

Watch video of the incident posted online by AJ+: