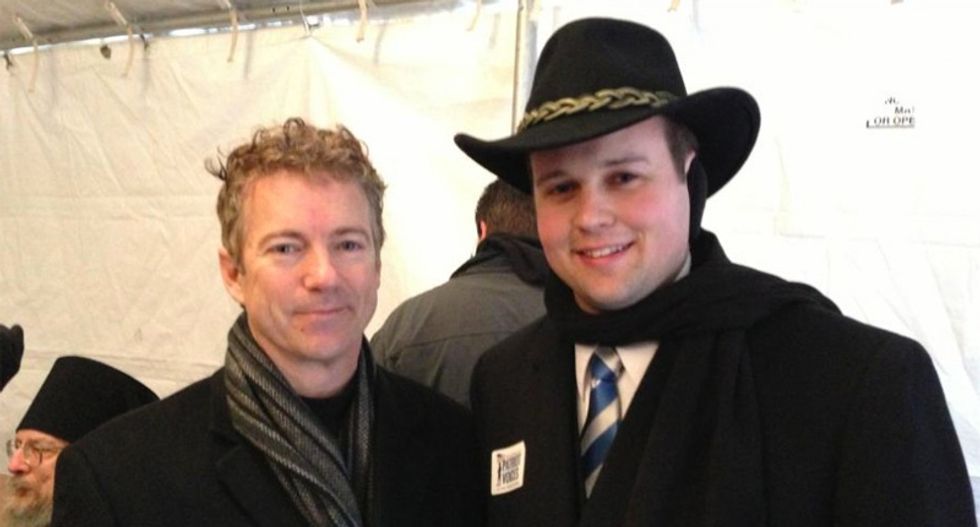 The Republican Party is currently firming up plans for their 2016 Presidential debates; attempting to figure out how to fit possibly 70 candidates onto one stage in a way that it doesn't make them look like a gospel choir -- only all white.

For the Sept. 16, 2015 event, the Ronald Reagan (blessed be His name) Foundation and Library announced a new format, dividing that debate into two groups with the "Top 10" in the polls in one flight and the garbage time players sitting on the bench, appearing later for the talent portion of the crazy train pageant. In order to make the tackling dummy C-list, a candidate must meet the minimum threshold of 1 percent in public polling, so Bobby Jindal can probably make other plans for that day. Maybe go see a movie, shop for shoes, stare wistfully at the gulf and wonder where it all went wrong.

With so many candidates lining up, many voters may become confused by which white guy is the white guy that all the white guys are gonna vote for.

With that in mind -- and with a Twitter assist from former Family Research Council employee Josh Duggar of the sexing and baby-making Duggar breeding line-- here are some photos of GOP candidates taken with Josh. There probably won't be any new ones forthcoming from him despite the fact that he is expected to have a lot of time on his hands going forward because it turns out he was pretty forward with where he put his hands when with the young gals... including his sisters.

During Josh's brief public career shaming the pervs for Jesus, he was always willing to gladhand a politician who came to him hoping some of that Duggar magic would rub off. Now it seems it may not have "technically" been "magic."

Remember to bookmark this for the future, when the debates roll around. You -- and the Republicans in the photos -- can thank me later for the reminders.

He's not running, but here is Josh with RNC anagram Reince Priebus

This would be Josh with Iraq flip-flopper Jeb Bush...who would rather be photgraphed with his brother right now

Oh Look, here is Josh with Iowa breadbag lady Joni Ernst, who could be a VP contender. Sure, why not?

Here he is with Bobby Jindal and Rush Limbaugh's brother, Fredo. Jindal is the only candidate whose candidacy this photo will absolutely have no impact on.

Here is Josh with Koch Industries Employee of the Year, Scott Walker

This is something Josh tweeted, but probably never read

Rick Santorum, because, of course