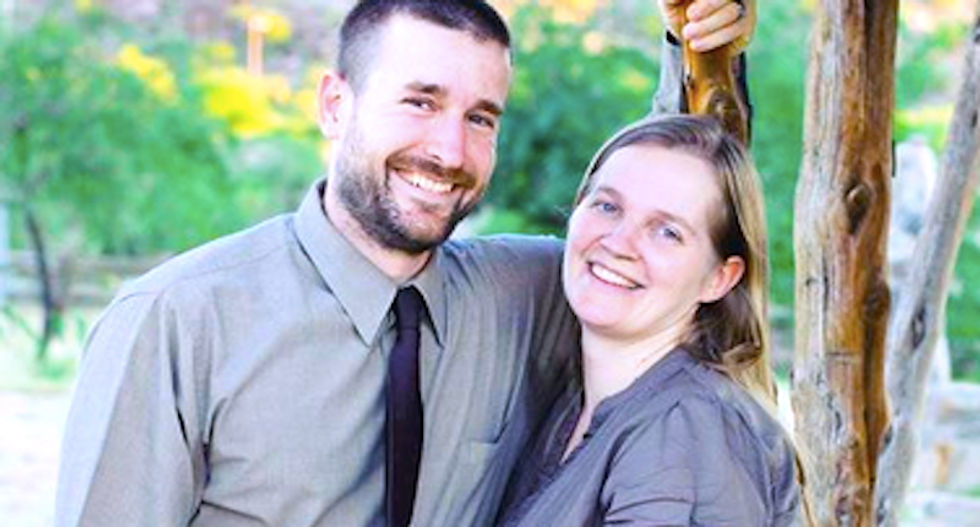 The wife of an Arizona pastor who predicted an “AIDS-free Christmas” if all gays were killed has condemned the Duggar family – as “worldly” liberals who promote a “false gospel.”

Zsuzsanna Anderson said she had never met the stars of TLC’s “19 Kids and Counting,” but the mother of eight children has streamed every one of their regular episodes and specials because she likes “seeing and learning from the daily workings of a large family.”

The wife of Pastor Steven Anderson, who bars homosexuals and demands silence from women at his Faithful Word Baptist Church in Tempe, said in a blog post she disapproved of the “deceptive” way the Duggars practiced their faith.

“We have for years held and publicly stated that the Duggars are liberal and worldly, even as they are known for being ‘fundamentalists,’” Zsuzsannah Anderson said. “Maybe their beliefs are, but what they are publicly willing to take a stand for is weak and anemic.”

For example, she said, Jim Bob and Michelle Duggar refused to acknowledge that they spanked their children and instead focused on their “positive approach” of praising their children’s good behavior.

Anderson said she had no doubt that Josh Duggar, who admitted to police as a teen that he had molested his sisters and other girls as they slept, had been sexually abused himself – but she was unforgiving toward the 27-year-old married father if had become a "reprobate pedophile."

“I believe that all pedophiles are reprobates, that they are unregenerate and in fact can never change, and that they, like all sexual deviants, should be executed as the Bible demands, lest they spread their abusive ways and corrupt more innocent lives,” Anderson said.

“I do not believe that pedophiles or other deviants who claim to have found God are telling the truth," she added. "I believe this is a lie they tell to gain access to easy targets, namely children in church, at camp, etc."

Jim Bob Duggar, during a 2002 U.S. Senate campaign apparently inspired by his GOP primary opponent's divorce, agreed that execution was an appropriate punishment for incest and rape.

Anderson said the Duggars “have always been running in circles known to attract freaks and weirdos” since leaving “a soulwinning, independent Baptist church” to join a “home church” affiliated with ATI and Vision Forum – which saw their leaders brought down by sex scandals.

She said the Duggars promote a “false gospel” that calls for “repentance from sins,” rather than following the Bible, and associated “obviously false prophets” such as creationist Ray Comfort and actor Kirk Cameron.

“Because of this, I have only ever given them a 50/50 chance of truly being saved,” Anderson said. "Unless I talked to them in person, it is impossible for me to give my opinion on it accurately just because as with everything else, they are so wishy-washy it's hard to put a finger on it. I give their children even less of a chance of being saved, since it seems all they have ever known is this false gospel crowd."

She said the Duggars had missed an opportunity to promote religious doctrine on their reality show, but she said it was “reckless and irresponsible” for the parents to agree to appear on the program with such “skeletons” in their family’s closet.

“It was insane to think they could become celebrities, and this not come to light with as many people as were involved in it,” Anderson said. “Did they consider the repercussions on their son's life, who would even under the best of circumstances have been reeling to recover from this (if that is even possible)? Did they think the world, who was looking for any way to attack them, was going to look the other way on this? Great shame has been brought upon the cause of Christ through their desire to be rich, popular, or both.”