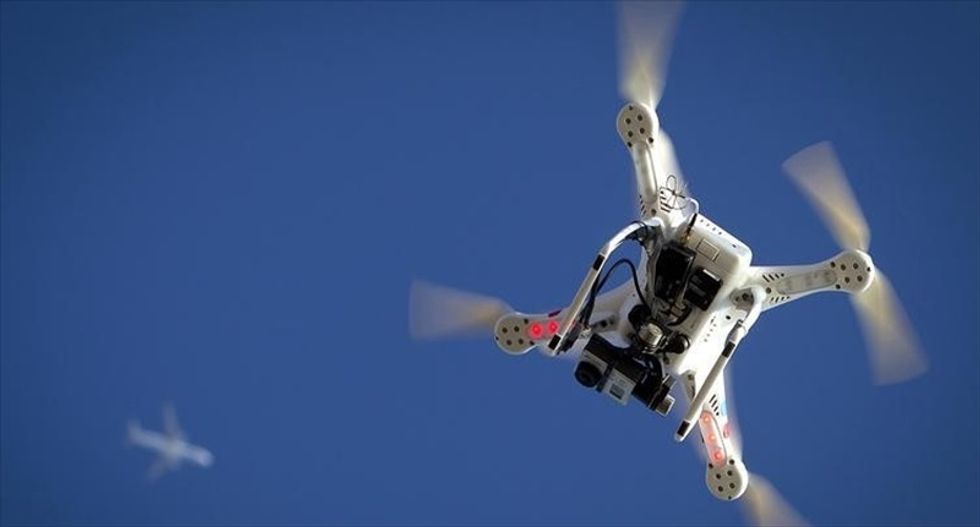 An airplane flies over a drone during the Polar Bear Plunge on Coney Island in the Brooklyn borough of New York on Jan. 1, 2015. Photo by Carlo Allegri for Reuters.

U.S. aviation regulators are talking to drone makers and service providers about testing commercial drones that can fly beyond an operator's visual line of sight, currently banned for safety reasons, according to people with knowledge of the discussions.

The potential partnerships between the Federal Aviation Administration and industry would be a milestone in developing unmanned aircraft that could be used for a variety of business applications such as delivering packages, monitoring crops or inspecting energy transmission pipelines.

It also raises the likelihood that beyond-visual-line-of-sight (BVLOS) technology will ultimately be accepted by new commercial drone regulations that the FAA is working to finalize within the next two years.

The proposed FAA rules unveiled in February would lift the current near-ban on commercial drones. But the proposals, as written, still would not allow for advanced operations such as package delivery services championed by e-commerce company Amazon.com because they require drones to remain within an operators visual line of sight as a safety measure.

However, while the FAA works to finalize regulations, companies can win agency approval to use commercial drones on a case by case basis. Up to now, the agency has not approved drones capable of flying beyond an operator’s line of sight.

Beyond-line-of-sight operations use on-board cameras to enable an operator to make course changes to avoid obstacles, including other aircraft.

The FAA's consideration of BVLOS operations comes amid intense pressure from Congress and companies who say the technology, originally developed for the military, is already being used in other countries. Failure to adopt the technology, they argue, could stifle the nascent U.S. market for commercial drones.

In an announcement that could come as early as next week, the FAA is expected to set out plans for partnering with industry on commercial BVLOS operations, according to the people familiar with the matter. The agency would seek to limit safety risks by allowing flights only under restricted conditions, such as uninhabited agricultural land in remote locations.

Sources said the new operations could be similar to BVLOS flights that the University of Alaska has been conducting over the past five years in remote regions above the Arctic Circle, where unmanned aerial systems are used with FAA approval to map sea ice, monitor marine life and inspect oil and gas installations.

The partnerships would be the latest among several FAA moves in recent months to ease restrictions on commercial drones in the United States.

In April, the FAA loosened its requirement for outdoor testing to occur at designated test sites, by granting Amazon approval to test drones outdoors at a company-owned site. Amazon, other companies and drone industry groups have also used a public comment period on the proposed regulations to urge the agency to allow drones to fly beyond line of sight.

"BVLOS technology has matured to the point that BVLOS operations are now permitted in some of other countries... where operations have been conducted for years, with high levels of safety," commented the Small UAV Coalition, whose members include Amazon, Google Inc , and smaller drone companies.

The coalition asked FAA to permit certain BVLOS operations "in the relatively near term", rather than waiting for the proposed rules to be finalized over the next two years.

"The agency is likely to receive requests from small UAS operators seeking to conduct (beyond line of sight) operations ... long before the rule is finalized," Amazon said last week in a comment to the FAA.

But the Air Line Pilots Association, which opposes beyond line of sight operations because of safety reasons, said such operations would come with "unacceptable risk."

"The use of an on-board camera cannot replace the awareness provided by direct observation by the operator/pilot or designated visual observer."