Jon Stewart hammers Jeb Bush's Iraq flip-flop: Was it that hard to distance yourself from 'W'? 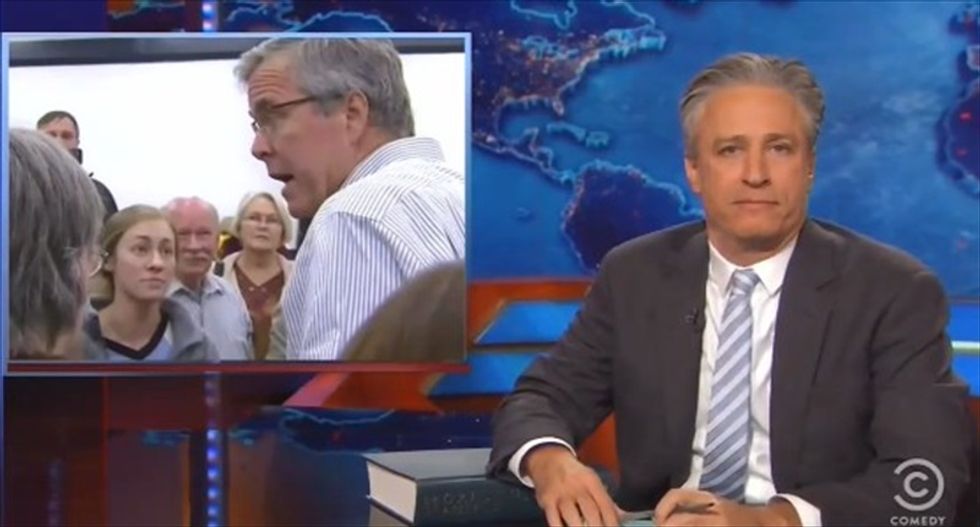 Jon Stewart tackled ex-Florida Gov. Jeb Bush's non-candidacy on Thursday's Daily Show, arguing that Bush is insisting he's not in the 2016 presidential race in order to avoid campaign rules regarding his revenue stream.

But by then, the host said, Bush was already taking all of the traditional steps to prepare for a campaign.

"There's surely a perfectly good reason why then, if you're not a candidate, you've set up a traditional PAC; a super PAC which is poised to raise $100 million by the end of May; a non-profit which has raised secret money; that you've gone to events in New Hampshire, and Iowa, and Nevada; you [made] a commencement speech at a school so Christian students are banned from pre-marital book sharing; gave a foreign policy speech to the Chicago Council of Foreign Affairs; gone to CPAC; an NRA convention; assembled an advisory team; and set up headquarters in Miami," Stewart said. "Maybe Jeb just happens to be a guy with the most boring bucket list ever."

Stewart also offered Bush some backhanded praise for finally saying -- albeit defensively -- that he would not have invaded Iraq given the benefit of hindsight.

"Thank you. Was that so hard?" Stewart said, adding, "Did you have to say it with a tone that implied you would end that sentence with, 'OK, f*cko?'"

On Tuesday, Stewart mocked the former governor for backpedaling after telling Megyn Kelly that he would have authorized the invasion.

While that interview set off a saga for Bush that had "more sequels than Star Trek, Madden football and Knockin' Nurses series combined," Stewart did credit Kelly for asking Bush about the issue, lamenting that he could have been great friends with the Fox News host.

"Imagine what a tremendous team we might have made -- if we didn't fundamentally disagree on almost everything," he said of Kelly.