WATCH: All hell breaks loose when bystanders stop NY cop from arresting girl who argued with him 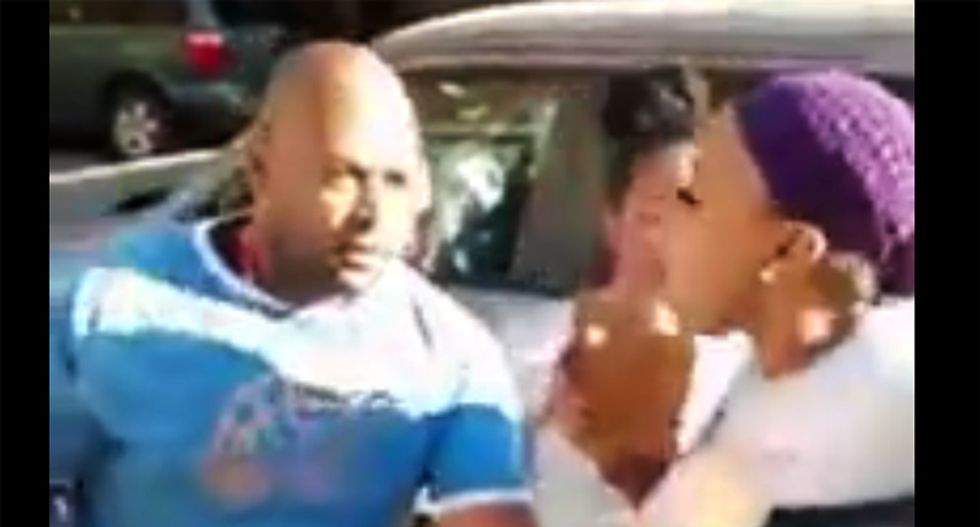 A New York City police officer thought better of arresting a 14-year-old girl who argued with him when spectators jumped to her defense, getting between the cop and young woman.

According to the Free Thought Project and the Copwatch Patrol Unit who posted the video on their Facebook page, police were responding to a report that a child had pushed a button on a police call box in the West Harlem neighborhood.

One officer questions two young females after dragging them over by his car by their arms.  After releasing both girls and climbing back into his car, a passing woman instructs one of the girls to get the officer's badge number and full name.

While asking the officer for the information, telling him he had no right to manhandle her, the enraged officer leaps out of his car and attempts to grab her again.

Then all hell breaks loose as the girl pulls away from him and multiple bystanders jump in between the two, tugging the girl way from him while shouting at the officer that he has no cause to arrest her.

As his partner steps in -- telling everyone to back off -- the officer makes his way back to his car, once again attempting to grab the girl before giving up, getting into his car, and driving off.

As he pulls away, one man can be heard yelling, "Respect the neighborhood."

Watch the video below from Michael Barber of the Copwatch Patrol Unit:

Secretary of State Scott Schwab believes election security requires vigilance due to evolution of cyber threats, but the voice of Kansas’ top election official revealed a touch of exasperation when conversation pivoted to uninformed people dedicated to shaking public confidence in voting systems.

Schwab said Kansas had conducted 300 post-election audits without uncovering a single failure. Still, he said, people were pushing theories of voter misconduct that fell short when it came to leaping from suspicion to fact.

"Shocking." That's the word being bandied about in both news coverage and social media reactions to a nearly 300-page report released on Sunday that details both extensive sexual abuse within the Southern Baptist Convention (SBC) and a thorough effort to cover it up by the denomination's leadership. As Christianity Today bluntly noted, the convention had "a secret list of more than 700 abusive pastors," but "chose to protect the denomination from lawsuits" rather than the victims or potential future victims in the pews. Instead, protecting predators became the norm, and victims of abuse were frequently blamed. One victim, whose abuse started when she was 14, "was forced to apologize in front of the church," but forbidden to name the pastor who had forcibly impregnated her.

The situation is, indeed, horrific. It's a minor miracle that this report even happened. Activists have been clamoring for it, but have faced a massive institutional resistance from the leadership of America's largest single Protestant denomination. One cannot help but marvel at the nerve of some Southern Baptist leaders who engaged in the coverup. SBC general counsel Augie Boto, for instance, responded to victims and their allies by accusing them of being part of "a satanic scheme to completely distract us from evangelism." Boto even appeared as a character witness for a Nashville gymnastics coach who was convicted on charges of molesting a 10-year-old girl.