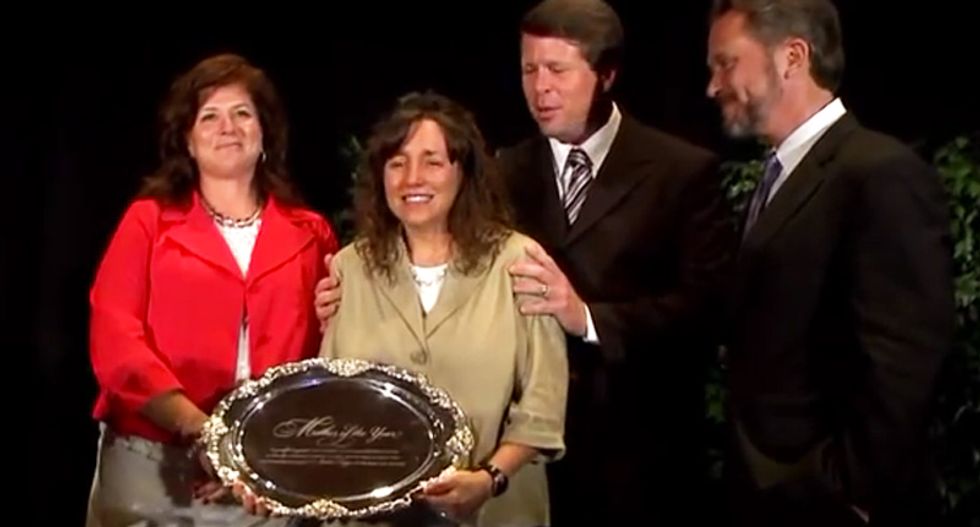 At the same time that Michelle and Jim Bob Duggar were covering up the fact that their eldest son Josh was molesting young girls -- including his sisters -- the mother of 19 was traveling around the country accepting awards for being "Mother of the Year."

One of the awards she received was from a pastor who later left his ministry after admitting to adultery.

In a 2004 profile on CBS, entitled "What a Mother!" Michelle Duggar is quoted as saying, "We actually didn't set out to have a large number of children. I don't think that was our intention when we were first married. But I think we realized children are a gift."

The CBS story on the Duggars was built upon Michelle Duggar being given the "Young Mother of the Year Award" in Arkansas,  sponsored by American Mothers Incorporated.

At the time of that award, Michelle and Jim Bob Duggar were a year or two removed from hushing up the child molestation scandal that burst upon the scene this week.

In the CBS video, 16-year-old Josh Duggar is seen describing the parade of siblings who followed him into the world, saying, "I just got used to it. They way they came along. They kept coming and they kept coming."

In 2010, Michelle Duggar was honored again, this time by the Vision Forum Ministries of  Texas at their "Baby Conference."

"Michelle Duggar is the real deal," said Doug Phillips, President of Vision Forum Ministries. "She embodies the very best of a Christian role model for women. She is a highly intelligent and gracious woman of God and a capable and faithful helpmeet to her husband Jim Bob. As a mother, Michelle is singular. She has modeled for millions a passion for God's gift of the fruit of the womb and a tenderness and wisdom in raising her 19 children that have been downright inspiring."

Vision Forum leader Phillips stepped down from the ministry in 2013 after admitting to "an inappropriate extra-marital relationship with a woman." He was later excommunicated by the church, and VisionForum Ministries was shuttered as donations dried up.

Watch video of the presentation below, uploaded to YouTube by Vision Forum Ministries: