Greyscale in Game of Thrones and the biblical mistranslation of leprosy 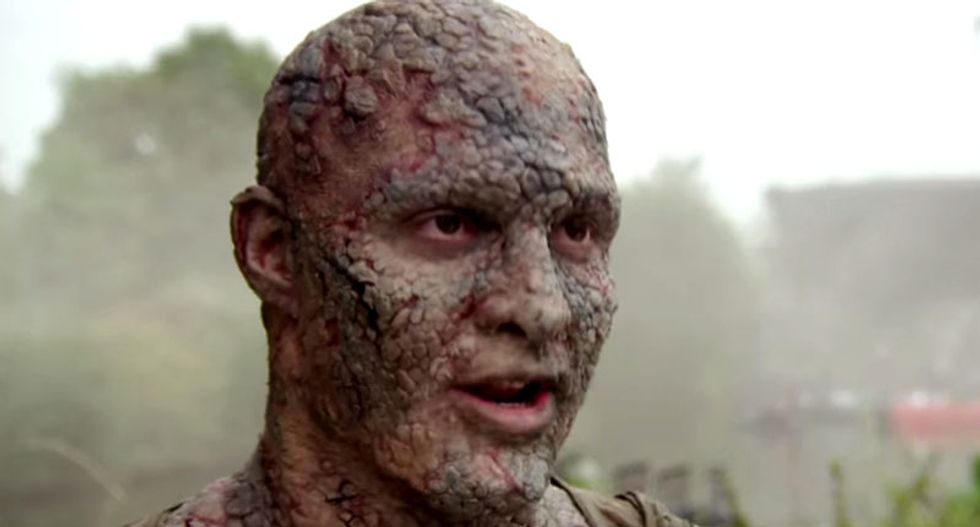 A Game of Thrones character with greyscale (Screenshot/YouTube)

In the neighborhood where I lived as a graduate student in the mid-1970s, there was a man whose face was remarkably disfigured. Half of it seemed melted, as if it had been fashioned of candle wax. You would spot him after dark on the streets near my university, holding one hand in front of the burned part of his face while he walked. Seeing him filled me with pity, but also horror. And then shame at my own horror.

I thought of my long-ago reactions to the burned man when I heard about Greyscale, the fearsome disease that afflicts some of the characters on Game of Thrones (and also in the series of books the TV shows is based on). Characters with Greyscale are sometimes sent into lifelong quarantine – or exile, depending on how you look at it – in a ruined city.

There’s been considerable discussion about what to make of Greyscale, and which modern diseases it might imitate, and why it is only sometimes curable. Evidently, Greyscale resonates.

The world Game of Thrones takes place in is ostensibly based on the medieval and early modern eras. To readers and viewers of the series, Greyscale and its disruptive terror might be a reminder of the Black Death or those mysterious poxes and fluxes that chroniclers wrote about in the era before medical advances allowed physicians to make specific diagnoses. But I wonder if Greyscale’s allure for contemporary audiences has to do with disfigurement.

We have always been fascinated (and repulsed) by disfiguring diseases. And disfigurement has long been burdened with presumptions about permanent moral taint. The capacity of this fantasy disease to grab so many people’s attention is an extension of a long historical line: the tension between loathing of the unsightly and shame over our own repulsion. It goes back at least to medieval Europeans’ dealings with lepers.

A biblical mistranslation shaped how the medieval world understood leprosy

As with leprosy, Greyscale can leave survivors alive, but disfigured – bearing a permanent mark of the disease. In the books, one character describes a girl who survived Greyscale saying that “the child is not clean.” And like leprosy in the medieval era, Greyscale disfigures, but how it is transmitted is not well understood.

A mistranslation in the Bible lead to leprosy’s infamy. Chapter 13 of Leviticus concerns people whose spiritual impurity is reflected in a set of skin afflictions known collectively as tzara’at. The thrust of Leviticus, at this point, concerns the dramatic tension between polluting forces in the natural world and humans’ marshaling of nature’s pure, or purifying, forces (cedar, hyssop, clean water and so forth) in opposition. Indeed, Leviticus makes clear that tzara’at could be seen on cloth and the walls of houses, too. The crucial passage on tzara’at of human skin orders the spiritually impure person to dwell “outside the camp” for eight days. Reflection, along with priestly ministration, will restore the sufferer’s wholeness and allow him to be return to society.

When the text of the Hebrew Bible was translated into Greek in the Septuagint in the third century BC, tzara’at was ambiguously rendered as lepra, from the Greek leprei, already in use by Hippocrates to describe a collection of scaly patches. The word lepra carried over into the commonly used Latin translation of the bible, called the Vulgate.

Thus, while medieval Christians’ banishment of lepers was supposed to be based on the Bible, the disease medieval Europeans called leprosy (and that we now know as Hansen’s disease) is the result of infection with Mycobacterium leprae. Yet, that bacterium almost certainly had not existed in the Near East at the time the relevant biblical text was being handed down, in the 6th and 5th centuries BC. Biblical “leprosy” was not medieval leprosy.

Being a leper didn’t always mean you had leprosy

Leprosy came to denote not only those disfigured by Hansen’s disease – which was by then present in Europe – but people with all manner of skin conditions, or people who simply looked like they shouldn’t be allowed to circulate freely.

Rationalizing ostracism in biblical terms gave the shunning of lepers the force of moral imperative. And as time went on, the postulate in Leviticus that the leper, once cleansed, could return to normal society was lost. In its place came a sensibility about leprosy as fearsome. Although Hansen’s disease is not easily transmitted, the medieval Europeans sought ways to cleanse society of its disfigurement.

In the eighth century, for instance, Pope Gregory II said that lepers should not mix with healthy Christians at sacred events. By 1179, a papal council decreed that lepers be provided with their own churches, cemeteries and priests. On that basis, thousands of leprosaria were built in Europe to house the people deemed unfit.

Not only was leprosy itself disfiguring, but it carried moral taint through rumors that it was associated with sexual impropriety or resulted from a superabundance of melancholic (black) bile.

By this thinking, disfigurement of Hansen’s disease was inextricably linked with moral condemnation. Consider a statement by a 12th-century monk from the Abbey of St Victor, near Paris:

“fornicators, concubines, the incestuous, adulterers, the avaricious, userers, false witnesses, perjurers … all are judged to be leprous by the priests.”

And perhaps disfigurement is even more terrifying today than in the Middle Ages. Certainly, when AIDS appeared in America in the early 1980s, the dark blotches of Kaposi’s sarcoma, the pallor, and the cachexia (wasting) that it often conferred made it both fascinating and repulsive.

As late as the 1990s, a survey showed that one in six Americans still admitted to feeling “disgust” at people with AIDS.

We are more tolerant of homosexuality today (and, to a lesser extent, drug injectors). And leprosy no longer bears the stigma it once did. But our culture is more than ever oriented to image. And there are more ways to do something about undesired aspects of physiognomy: orthodonture, cosmetics, smoothing and lifting, surgeries of all kinds, and so on.

Not surprisingly, we find other ways to layer moral disapproval on disfigurement. Isn’t this why obesity lends itself to narratives of gross (literally!) distortion of nature – eating too much, moving too little? We are so accustomed to looking at obesity as symptomic of a failure of sociability that a popular strain of research can claim that obesity “spreads” through social networks. The overlarge are the lepers of today.

I don’t know why so many people think that nature is always pretty, and that unpretty people must be, somehow, incontinent – why so many of us still make assumptions not too far from those about lepers in medieval Europe. But it’s not surprising that, in our culture, a disfiguring and incurable condition like Greyscale has an arch sort of allure.

Philip Alcabes is Professor of Public Health at Adelphi University .