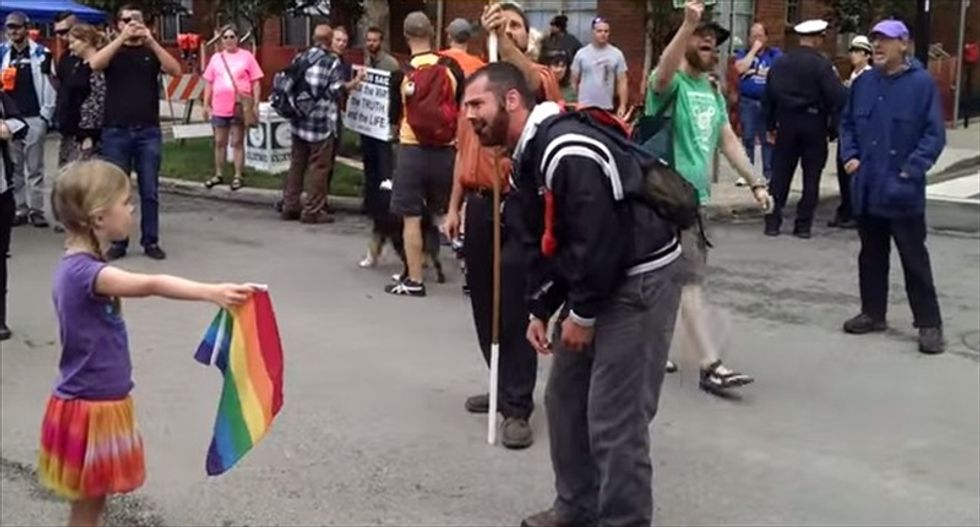 A 7-year-old Ohio girl and her father are garnering fans online after he posted footage of her facing down an anti-LGBT street preacher a day after the Supreme Court ruling legalizing marriage equality.

While the young girl and her family are excited for the attention, her father, Ryan Bowling, told The Raw Story in an interview on Tuesday night, they also find it "heartbreaking" that the encounter is remarkable.

"She's just decent to people because they are people," Bowling said. "She treats others fairly, because she wants to be treated fairly. That shouldn't go viral, it should just be who we are to each other."

As Towleroad reported, the encounter between the girl, Zea, and the preacher was first captured by her father during last Saturday's Community Festival, also known as Comfest, in Columbus. Bowling said Zea was volunteering at the event.

"A guy started yelling past us, in response to the street preacher, and Zea asked what he was angry about," he said. "When we told her the man was responding to the preacher, who wasn't on a microphone yet, she wanted to know what the preacher was saying."

Bowling said that since Zea was sitting in a wagon with her 2-year-old brother at the time, he moved them closer to the preacher so they could hear his remarks. Her initial reaction, he added, was "confusion, followed by shock as to why he would bother to come to Comfest just to be so mean."

Bowling and his wife had already informed her about the 5-4 decision a day earlier, he said.

"She has a very keen sense of justice about the whole thing," Bowling said. "When I told her on Friday, she said, 'It's what I've wanted for years. Now, if I did want to marry a girl, we could just be ourselves.'"

The brief clip shows the preacher telling Zea, "You can live a life full of His redeeming power. You'd have someone to look after you."

However, Zea does not engage with his argument, and instead holds up a rainbow LGBT flag toward him as onlookers begin to approach her and high-five her.

"The crowd was passionately on her side, right away, shockingly so. People cried, really. I honestly don't know that I've ever seen that many people looking out for her at one time," Bowling said of the encounter. "I almost didn't film it. It was pretty powerful, and I was trying not to be in my phone. Somebody I didn't know sniffled pretty loudly, and I realized I might be missing something kind of important."

Bowling posted the footage online on Monday, saying the unidentified preacher "deflated visibly when he saw her coming," and that he "was much more sodomy, brimstone, and bellowing until she got close to him."

Zea also drew the attention of a local shirt designer, Zachary Traxler, who made her the centerpiece of a t-shirt celebrating the high court's ruling.

"I wasn't really thinking of designing that shirt just to make money off of it," said Traxler, who also noted that his business has supported pro-marriage equality efforts in the past. "But I was hoping I could design the shirt, get a hold of whoever took the picture, and I quickly learned who the father was."

Bowling approved the sale of the shirt, which features the text of the Fourteenth Amendment in the background. Traxler said proceeds from sales of the shirt will go directly to Zea.

A portion of the proceeds, Bowling said, will also go toward a charity of the family's choice. He added that they are still reaching out to local groups they have in mind.

"Zea is clear that she wants it to be used to help LGBT kids have a place that they can be safe," Bowling said.

Watch footage of the encounter, as posted on Monday, below.

Note: This article has been updated to reflect the first images of the encounter.