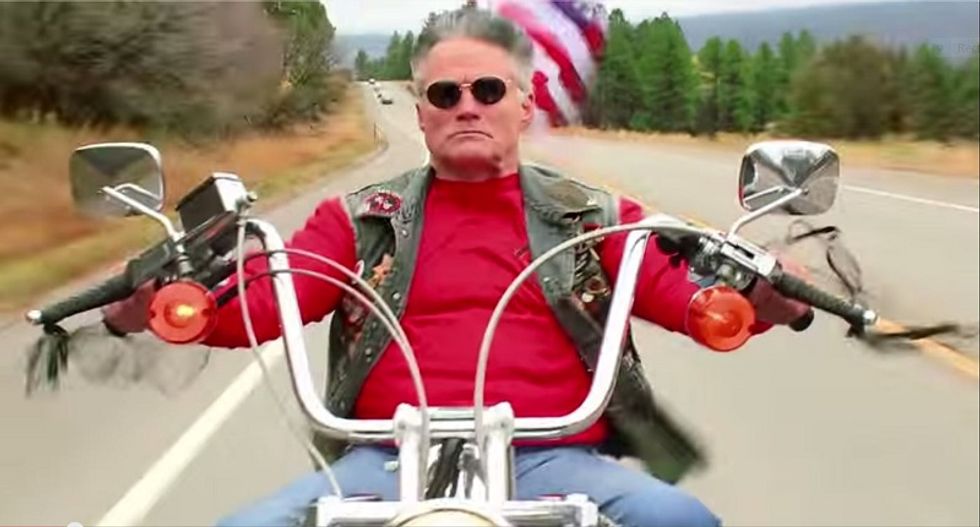 Mike Huckabee is being sued in a class action case that claims he violated the Telephone Consumer Protection Act with recorded robo-calls intended to promote Christian propaganda film, "Last Ounce of Courage" while masquerading as a public survey, Courthouse News Service reports.

The original lawsuit was filed by Ron and Dorit Golan, who were among 4 million people to receive the call, even though the couple was on Missouri's "do not call" list at the time. The claim was dismissed in 2012, but this week the decision was reversed by the Eighth Circuit Court of Appeals.

The Golans received unsolicited messages on their home phone saying, ""Liberty. This is a public survey call. We may call back later." Had they answered, they would have heard a pre-recorded survey from Huckabee asking how they felt about "traditional American values," Courthouse News reports.

"Although the campaign appeared to survey whether recipients had 'traditional American values,'" the film's promoters were "more concerned with getting viewers to see 'Last Ounce of Courage' than gathering information about them," Judge Diana E. Murphy wrote, according to Courthouse News Service. What matters, she added, is all the members of the class action were phoned with the purpose of promoting the film.

The court will decide whether Huckabee can be held liable, Courthouse News reports.

The low-budget 2012 film is heavily-laden with nationalistic and religious imagery. It's about a veteran named "Bob Revere" whose son Tom dies fighting in a war, according to the movie's IMDB page. Bob and grandson "Christian Revere" struggle to connect because of the loss. In the movie's trailer, Bob can be seen driving around on a motorcycle with a large American flag flying from it. Inspired by the surly, moppy-haired Christian, who prods, "He gave his life for his country. What are we doing? What are you doing," Bob becomes mayor.

As mayor, he launches a crusade to promote American-Christian values, but comes under attack from ACLU types trying to keep church and state separate. He must then protect Christmas and Christianity, which seem to be synonymous with American nationalist imagery, and mounts a giant cross on a building. The trailer ends with him being led away in handcuffs while the townspeople cheer him.

The film cost just under $1.6 million and grossed $3.3 million, according to IMDB. It was largely panned by critics.