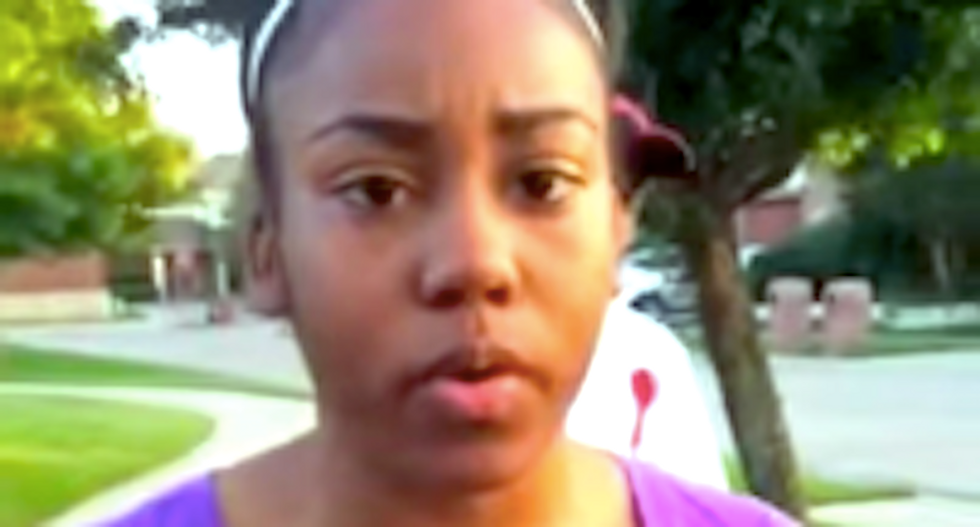 Neighbors are defending police who chased black teenagers at gunpoint and tackled a girl wearing a bikini after breaking up a party at a community pool over the weekend in McKinney, Texas.

But one homeowner and her daughter say those neighbors confronted some teens when they went outside and began taunting them and their guests with racial slurs before starting a fight.

Tatiana Rose, who lives in the Craig Ranch neighborhood and hosted the party with her siblings, said a woman and man who live in the neighborhood showed up and called their friends “black f*ckers” and told them to return to their Section 8 housing.

The 19-year-old Rose said most of her friends who attended the party live in Craig Ranch -- which sits along a golf course.

Rose said one of her younger brother’s friends -- a white girl named Grace Stone -- scolded the neighbors and told them it wasn’t right to use racial slurs.

“So then they started verbally abusing her, saying that she needs to do better for herself, cursing at her, and I’m saying, no that’s wrong – she’s 14, you should not say things like that to a 14-year-old,” Rose said.

She said the woman, who she identified as Kate, told her to go back to her government-assisted housing and smacked her in the face when she stuck up for the younger girl, and she said another woman also attacked her.

They called police, and white partygoers said the officers ignored them and chased, tackled, and pointed guns at black, Hispanic, or Arabic teens.

Rose’s mother said she didn’t understand why neighbors confronted the teens and then called the police instead of speaking to her about their concerns.

“I’m just upset that we couldn’t have a peaceful event, and if it was any issues that they truly had, they should have came to me, the adult that was here at the event, and said, ‘Hey, we don’t want the kids’ – whatever – then let me handle it, and not go to that extreme,” said LaShana Burks, who owns the home where the party was held.

One of the officers who responded to the noise complaint, Eric Casebolt, has been suspended.

Watch an interview with Rose and her mother posted online by E Johnson Photo: