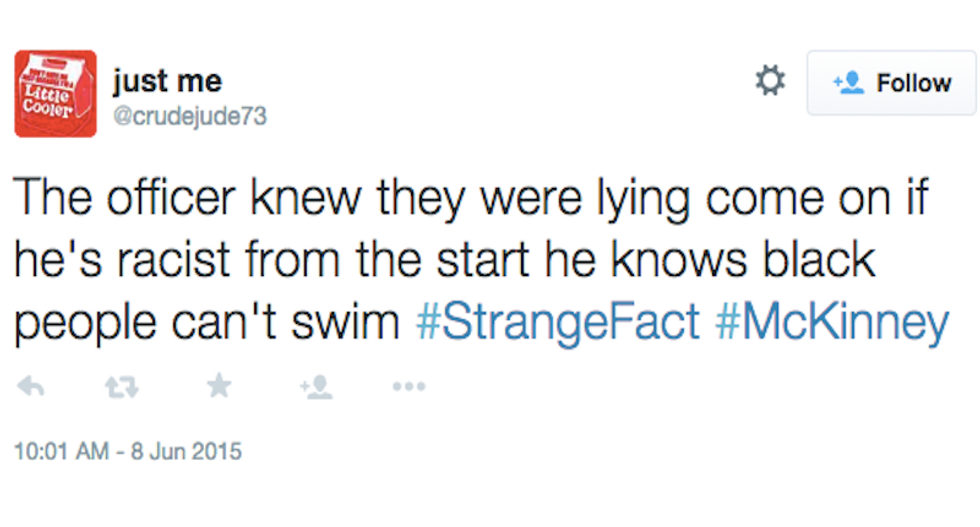 Video showing police officers targeting black teens after breaking up a pool party in a suburban Texas neighborhood has shocked many Americans – but, predictably, it has rallied racists in defense of cops.

Cpl. Eric Casebolt of McKinney police has been suspended after video shot by a bystander clearly shows him chasing teenagers with a gun and kneeling on a bikini-clad girl’s back after responding to a complaint about a fight at a public pool.

Conservative media hedged, suggesting viewers should be skeptical of what their lying eyes might tell them.

That wasn’t enough for some Fox News fans.

Twitter cop apologists said the teens – many of whom live in the neighborhood and were invited to a cookout by residents – got what they deserved and blamed their parents.

Twitter racists suggested the black teens needed a white lady to yell at them or perhaps beat them with a wooden paddle.

Police apologists, as always, urged patience instead of alarm.

Once again a clip taken out of context to suit the media narrative and to cause more moral outrage #McKinney
— Jordansson (@Jordansson)1433770786.0

Conservatives go to great lengths to defend gun rights – well, most of the time, at least.

No matter how bad any given race-related news story is, Twitter racists will always say things are worse in cities they view as stereotypically black.

Give me #mckinney over any #liberal city. At least the kids feel safe to go to a pool party and fight #chicago #baltimore
— jakdogg (@jakdogg)1433769453.0

Some Twitter users passed on racial stereotypes in weird attempts at humor.

Tatiana Rose, who lives in the neighborhood, said she and her siblings invited some friends to a cookout that was broken up by racist white neighbors who told them to return to Section 8 housing – just like this Twitter user.

Of course, some white people – even now – simply don’t want to swim in the same water with black people.