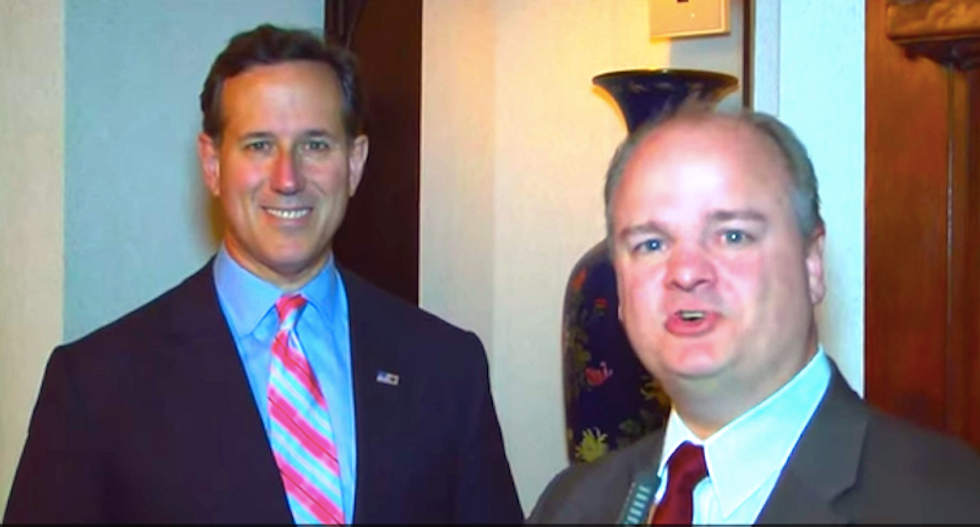 Rick Santorum assaulted irony in an interview with a demon-obsessed Colorado lawmaker by denouncing Iranian theocrats as untrustworthy agents of the apocalypse.

State Rep. Gordon Klingenschmitt conducted what he described as a” celebrity interview with a real presidential candidate” – who said same-sex marriage should be decided by legislators, not courts, and falsely claimed that Indiana’s anti-LGBT law did not allow religiously based discrimination.

Santorum told a clearly star-struck Klingenschmitt that he had been sounding the alarm on Iranian nuclear capabilities for at least a dozen years.

“I’ve made the case from the very beginning under two presidents that Iran should have an ultimatum put in place, give them a timeframe to open up and dismantle all of their nuclear equipment, decommission it all and remove it from the country,” Santorum said. “If they do not do that, then the United States has to proceed along a path starting with sanctions and ending wherever it happens to end up to make sure that Iran does not have a nuclear weapon.”

The conservative Christian said Iranians were irrational actors on the world stage due to their religious beliefs.

“Iran will, without a doubt, deploy that nuclear weapon – either against Israel or the United States or some other countries,” Santorum warned. “This is a radical theocracy, (and) it cannot be trusted.”

He warned that Iran’s Shiite government would share nuclear technology with countries ruled by Sunni Muslims.

“A nuclear Iran will lead to a nuclear Saudi Arabia, a nuclear Turkey, and a completely nuclearized Middle East – which is one of the most unstable areas of the world,” Santorum said. “This is not a good thing for the security of the United States or, frankly, for the world.”