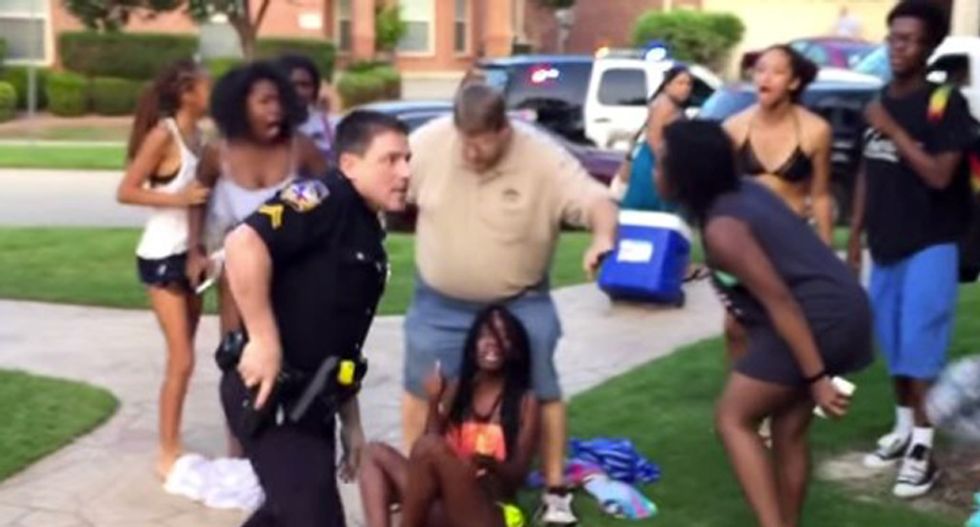 A Texas teacher insisted she was not racist despite pining for segregation in a Facebook post on the resignation of a police officer who violently broke up a pool party hosted by black teens.

Karen Fitzgibbons, a teacher at Bennett Elementary School in Wolfforth, apologized for the post – which she deleted Wednesday evening, after it was widely shared across social media – and the Frenship Independent School District is investigating, reported the Lubbock Avalanche-Journal.

The fourth-grade teacher said she was angry that Cpl. Eric Casebolt had resigned from the McKinney police department after video showed him slam a girl in a bikini to the ground and chase boys at gunpoint while responding to a fight at the community swimming pool.

“I’m going to just go ahead and say it ... the blacks are the ones causing the problems and this ‘racial tension,’” Fitzgibbons said. “I guess that’s what happens when you flunk out of school and have no education. I’m sure their parents are just as guilty for not knowing what their kids were doing; or knew it and didn’t care.”

The veteran teacher expressed regret that black Americans were no longer legally obligated to live in segregated neighborhoods and attend separate schools from whites.

“I’m almost to the point of wanting them all segregated on one side of town so they can hurt each other and leave the innocent people alone,” Fitzgibbons said. “Maybe the 50s and 60s were really on to something. Now, let the bashing of my true and honest opinion begin....GO!”

She punctuated her rant with a hashtag that insisted “I’m not racist,” along with two more that complained she was “sick of them causing trouble” and reminding readers that “it was a gated community.”

Fitzgibbons said she hoped that deleting the post and apologizing would resolve the issue, but she declined to say whether she had spoken to her employer about her remarks.

After a reporter showed him the post, a spokesman for the school district said all FISD employees are held to the same standard of conduct on social media that they are anywhere else in public.

"If an employee’s use of electronic media interferes with the employee’s ability to effectively perform his or her job duties, the employee is subject to disciplinary action, up to and including termination of employment,” the policy states.

The spokesman declined further comment on the employee issue, and the school board president did not return calls seeking comment.

Lubbock County, where the school district is located, is 87 percent white and 7.8 percent black, according the U.S. Census estimates.