That Game of Thrones scene that is still haunting you? It also haunted the ancient Greeks and Romans 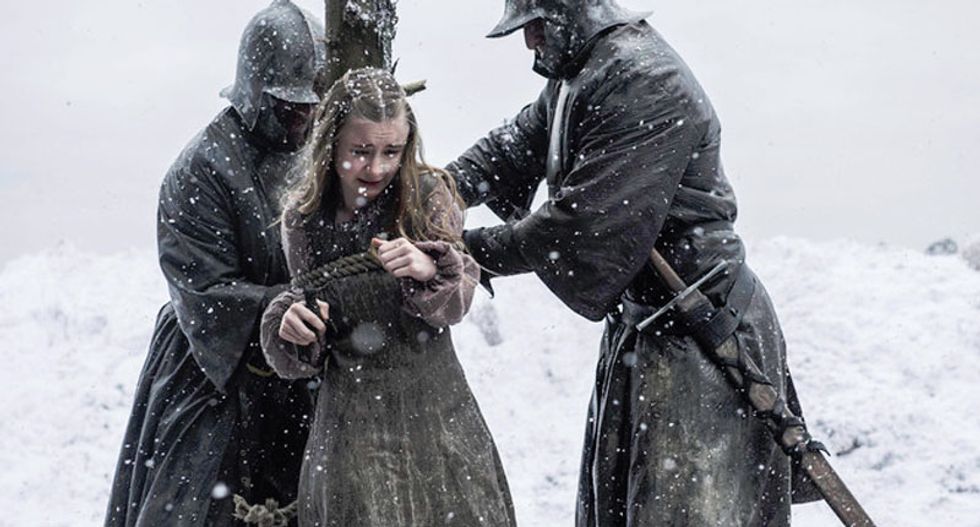 Royal families in myths and legends are infamous for intrigue, murder and mayhem. These very deeds are part of what make the stories epic and immortal. Indeed, the moral complexities inherent in the outrageous acts perpetrated by the characters of Homer’s Iliad and Odyssey or Aeschylus’ Agamemnon have engaged audiences for thousands of years, inspiring commentaries, debates, philosophical musings and reinterpretations.

Some want to understand, for example, why Achilles drags Hector’s body around the walls of Troy for nine days. Others want to grapple with the motivations behind Medea’s murder of her sons in Euripides’ tragedy of 431 BC.

Such actions are frightening. People experience them vicariously through performance, text and screen and they shudder. They are also enticing. There is a fascination that inspires the turning of pages and the irritation at inconvenient commercial breaks.

The shocking actions of desperate super-humans determined to make sense of their world through seemingly incomprehensible solutions remain a major narrative motif. And, in the world of myth and legend, plot scenarios have changed very little over the course of millennia.

Consider the recent episode of HBO’s Game of Thrones. Sunday’s instalment saw the sacrifice of Shireen, the virginal daughter of Stannis Baratheon.

This shocking twist is not merely the product of sadistic scriptwriters and producers. It is also the inclusion of a plot motif with a long heritage. Its most obvious correlative is the Greek tale of Iphigeneia, a small but significant component of the Trojan War myth cycle.

Iphigeneia was the daughter of two of the main protagonists (or super-villains) of this myth series. Her father was Agamemnon, King of Mycenae and brother of Menelaus, the husband of Helen.

Her mother was Clytemnestra, sister of Helen and all-round power-crazed avenger.

Agamemnon, having insulted the goddess Artemis, was punished by her in the form of wild winds that prevented the Greek fleet from sailing to Troy.

Her revenge threatened Agamemnon’s position as the preeminent king of Greece: his reputation was rendered vulnerable and his ability to demonstrate military prowess thwarted.

Agamemnon was told by Calchas – the unfortunate messenger of the gods – that he must sacrifice Iphigeneia in order to appease the goddess. Agamemnon’s response? He cut his daughter’s throat. The winds subsided and he and the Greeks sailed to Troy to retrieve Helen.

The tale haunted the Greeks and, later, the Romans also. They told it and retold it over centuries, sometimes accentuating Agamemnon’s vainglorious ambition, sometimes pitying the man who ultimately payed the price for his decision at the hands of his axe-wielding wife.

Other versions saved the young princess from her bloody end by claiming that she was rescued by the very goddess who sought to torment her father in the first place. These happy variants, championed by Euripides in two fascinating plays, have Iphigeneia whisked away and a deer substituted in her place.

But, unfortunately, no deus ex machina saves Shireen. As she is led to the pyre, she screams for her father but he is nowhere to be seen (at least by the princess). Amid the snow and the sombre yet complicit witnesses, Shireen is offered to R’hllor (Lord of the Light and the Red God).

In recreating this perennial mythic tale, the creative taskforce behind Game of Thrones not only casts Shireen as a new Iphigeneia, but Stannis as Agamemnon and Melisandre as an equally zealous Calchas. In so doing, they simultaneously cast a dedicated fan-base as “modern ancients”.

Like the myths that confronted and confounded the Greeks, this twist in Game of Thrones has challenged and disturbed its audience (see, for example, the plethora of blogging).

So, what do we make of a storyline that is decidedly counter-intuitive to contemporary ethics and mores? Dan Weiss, screenwriter, producer and occasional director of Game of Thrones has clearly given some thought to the moral conundrums underlying legendary narratives:

People who watch Game of Thrones don’t see the same world as Stannis and Melisandre […] To those characters, magic is real and it works. That’s something fun about this genre because when magic is real and you can see it with your own eyes in the show, it gives you a window into the heads of people who believe irrational things on faith.

Weiss’ opening statement is something of an understatement; of course fans of the series see the world differently to that of its protagonists. But he does make an interesting point about actions based on the irrationality of faith.

Like the religious backdrop to Agamemnon’s story, there is a powerful system of faith and fear of divine forces that underpin Stannis’ act of sacrifice. Like the offer of Iphigeneia to appease Artemis, Stannis offers his daughter in an attempt to save his people from the onset of starvation.

Yet, as with all great myths and legends, narcissism and megalomania are part of the narrative mix. Stannis, again like his Greek prototype, is also motivated by lust for power, as Weiss is quick to point out:

The perennial myths and legends of world cultures have lasted because what they have to say matters. What they say is not always nice – far from it – but it demands responses.

Is Game of Thrones a worthy successor to the powerful tales of antiquity?

Perhaps only the trials and tribulations of longevity shall tell.

This article is part of The Conversation’s Religion + Mythology series.

By Marguerite Johnson, University of Newcastle

Marguerite Johnson is Associate Professor of Ancient History and Classical Languages at University of Newcastle.