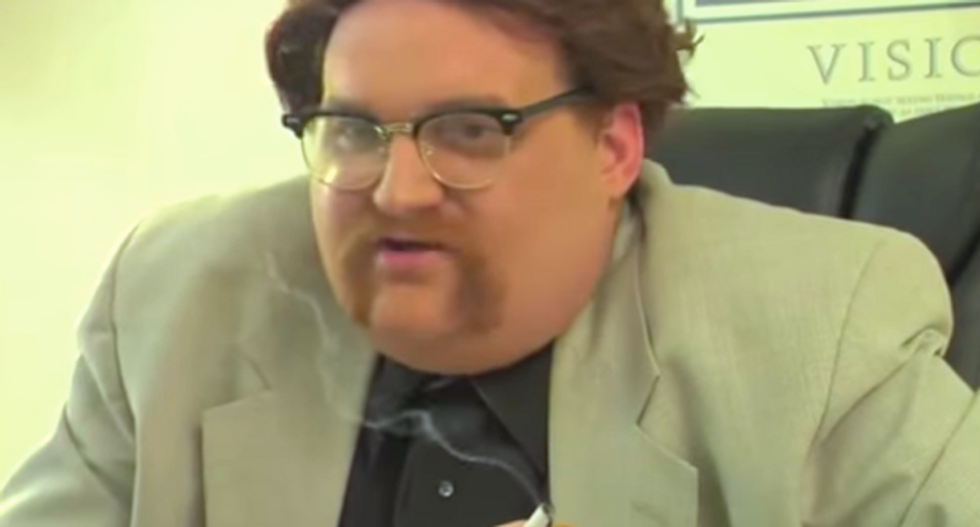 John Mark Huckabee, the eldest son of the Duggar-defending presidential candidate, took down a video this week that shows him acting in a low-budget film.

However, The Daily Caller managed to save the YouTube clip before the son of former Arkansas Gov. Mike Huckabee removed the clip.

In the film “Charlie Muse,” which was never released, Huckabee plays a chain-smoking sleazy businessman who sexually harasses an aspiring actress.

“You got to have a thick skin, and a willingness to do whatever it takes to succeed,” Huckabee says in the film.

“Do you not think there’s not an A-list actor out there that’s never had to show some tit or suck a little dick to get a part?” continues Huckabee, whose acting style can be described as strenuous. “You know what I mean, sweet cheeks?”

The actress rolls her eyes dismissively.

“What made it so experimental was that we weren’t going to show Charlie Muse,” Alvarez said. “Charlie Muse was the audience, so we were going to put the audience through Charlie Muse’s eyes -- and basically, what they wanted to do is show the not-so-positive side of agents in Hollywood.”

Huckabee -- a graduate of the Arkansas Film Institute – posted a 55-second clip on the YouTube channel for ProConEntertainment, the production company he operates.

He has also appeared as a “vile crime boss” in the violent movie, “Christmas: A Revenge Tale.”

His father declined to comment on his son’s film credits, but he has previously criticized President Barack Obama for allowing his teenage daughters to listen to music by pop star Beyoncé.

His younger son, David Huckabee, was fired as a Boy Scout counselor at age 17 for allegedly hanging a stray dog from a tree after it wandered into the camp where he worked.

Nine years later, in 2007, the younger Huckabee pleaded guilty to a misdemeanor after bringing a loaded Glock pistol in his carry-on bag into Little Rock's airport.

"It's one of those stupid things," Mike Huckabee said.

Watch the video clip posted online by The Daily Caller: