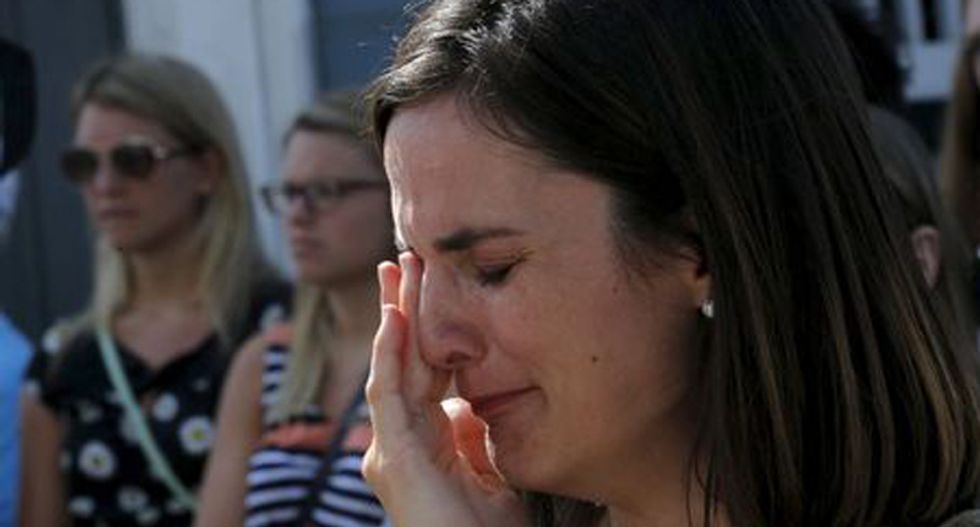 A church-goer who cannot fit into the Emanuel African Methodist Episcopal Church cries while standing in the street during a service in Charleston, South Carolina June 21, 2015. REUTERS/Brian Snyder

Hundreds of people packed a sweltering Emanuel African Methodist Episcopal Church in Charleston on Sunday as it reopened to worshipers just days after a gunman, identified by authorities as a 21-year-old white man, shot dead nine black church members.

"We are reminded this morning about the freshness of death that comes like a thief in the night," the Reverend Norvel Goff told a mostly black congregation that swelled to about 400 people for a memorial service remembering those killed on Wednesday in the latest U.S. mass shooting.

Inside the church, some wiped away tears and prayed as the organ played at the outset of the service. Outside the church, a large, mostly white crowd gathered to express solidarity with those inside.

"It has been tough and rough and some of us have been downright angry. Now is a time for us to focus on the nine families. At this time we need to be in solidarity," Goff said.

Armed police searched bags at the door of the church, home to the oldest African-American congregation in the southern United States, and officers stood at intervals inside the church along the side of the nave and in the gallery. Those attending the service used hand fans to try to keep cool in the heat.

The church massacre has again trained a spotlight on the pervasive and divisive issues of race relations and gun crime in the United States.

The suspect, Dylann Roof, was arrested on Thursday and has been charged with nine counts of murder. Authorities say he spent an hour in an evening Bible study group at the church, nicknamed "Mother Emanuel" for its key role in U.S. black history, before opening fire.

Federal investigators were examining a racist manifesto apparently written by Roof that surfaced on a website on Saturday. The site featured photos including one apparently of Roof with a Confederate flag, an emblem of the pro-slavery South in the American Civil War that ended in 1865, and white supremacist writings, as well as an "explanation" by the author for taking some unspecified action.

"I have no choice ... I chose Charleston because it is most historic city in my state, and at one time had the highest ratio of blacks to Whites in the country," it said.

The massacre was the latest in a series of mass shootings that have reignited a debate over gun control in a country where the right to own firearms is constitutionally protected.

Riley, on the CNN program "State of the Union," made a pitch for stricter gun control laws.

President Barack Obama, in an interview taped on Friday, blamed the powerful gun-rights lobby group the National Rifle Association and an apathetic American public for the failure to implement new gun control measures.

After a school shooting in Connecticut in December 2012, Obama proposed more background checks for gun sales and pushed to ban more types of military-style assault weapons and limit the capacity of ammunition magazines. But the measures failed to win passage in the U.S. Congress.

The church massacre has also renewed controversy around the Confederate flag, a symbol of Southern pride for some and an emblem of hatred for others.

On the NBC program "Meet the Press," James Clyburn, a black U.S. congressman from South Carolina, called on state lawmakers to pass legislation to remove the flag from the state capitol grounds, where it is mandated by law to fly.

The church shootings were the main topic at other Sunday services in Charleston, a city sometimes dubbed "The Holy City" because of its multitude of historic churches. Church bells rang throughout the city in honor of the shooting victims.

At the predominantly white-membership St. Michael's Church, founded in the 17th century, the Reverend Alfred Zadig Jr. said he did not know any of the victims and asked for forgiveness "for failing to be a pastor who reaches out beyond my world."

"You and I are so good at compartmentalizing grief," Zadig told his congregation about a mile from the massacre site. "Today I'm asking you to feel the unthinkable pain ... This is not God's will. God did not ordain this event to happen to make a point about racism."

(Additional reporting by Harriet McLeod and Lucia Mutikani; Writing by Will Dunham; Editing by Tom Heneghan and Frances Kerry)