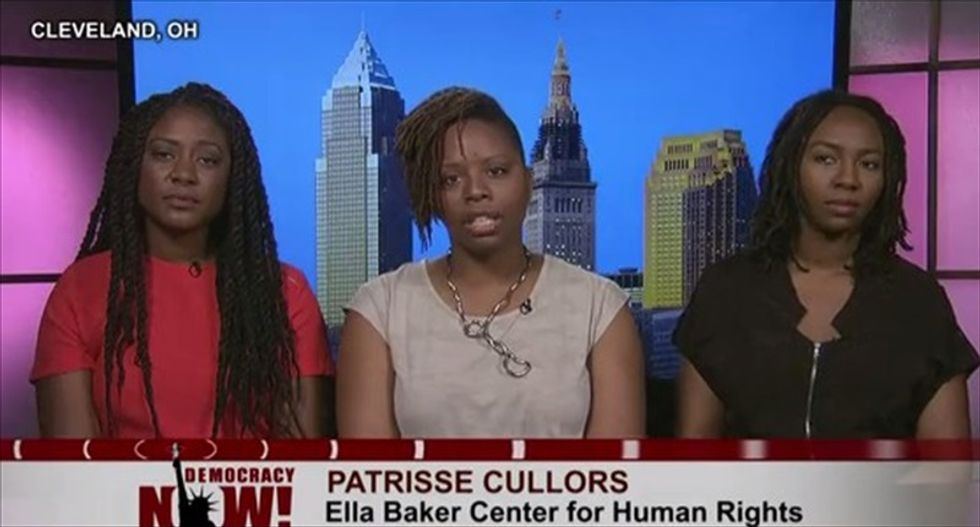 Officials have stated that Bland, who was incarcerated after a traffic stop over a "lane change" violation, swallowed "large amounts of marijuana" while in jail.

Prosecutors in Waller County, where she was jailed, said an autopsy of Bland revealed no sign of a struggle and ruled out a second autopsy. But Bland's family has argued that she gave no indication that she contemplated suicide, which runs counter to authorities' statement that she told a jailer she experienced "a little bit" of depression and post-traumatic state disorder.

Cullors said on Friday Bland's death is an example of a trend of what she called "severe prisoner neglect" inside county jails. Besides the beatings, she said, prisoners who do commit suicide do so after being ignored by authorities. Garza said what happened to Bland is similar to the incident she said prompted the creation of the #BlackLivesMatter tag, Trayvon Martin's death in 2012 at the hands of George Zimmerman.

"What's happening here with Sandra Bland is no different," Garza said. "Sandy Bland was driving, minding her own business, and that traffic stop ended her life. And we all have questions about what happened in that jail cell. We have questions about why was she pulled over in the first place. But the larger question at stake is, why do black lives have such little value in our society that they can be taken at whim, with no answers, no accountability and no justice?"

Cullors also addressed the protest at last week's Netroots Nation conference in Phoenix, where she was part of a group that disrupted a town hall event featuring Democratic presidential candidates Sen. Bernie Sanders and Martin O'Malley. She said the demonstration was an effort to challenge white progressives.

"Sandy had just been murdered," Cullors told Goodman, adding, "We wanted to make sure that we lifted up her name. And we wanted to make sure that folks didn’t go on with business as usual. And so, part of that push inside of the presidential forum was to spark a debate, to spark a national debate amongst the candidates. And Hillary Clinton wasn't there, but it was to challenge her, as well. People are often afraid to say black lives matter. They're often afraid to use the word 'black.' And we are not."